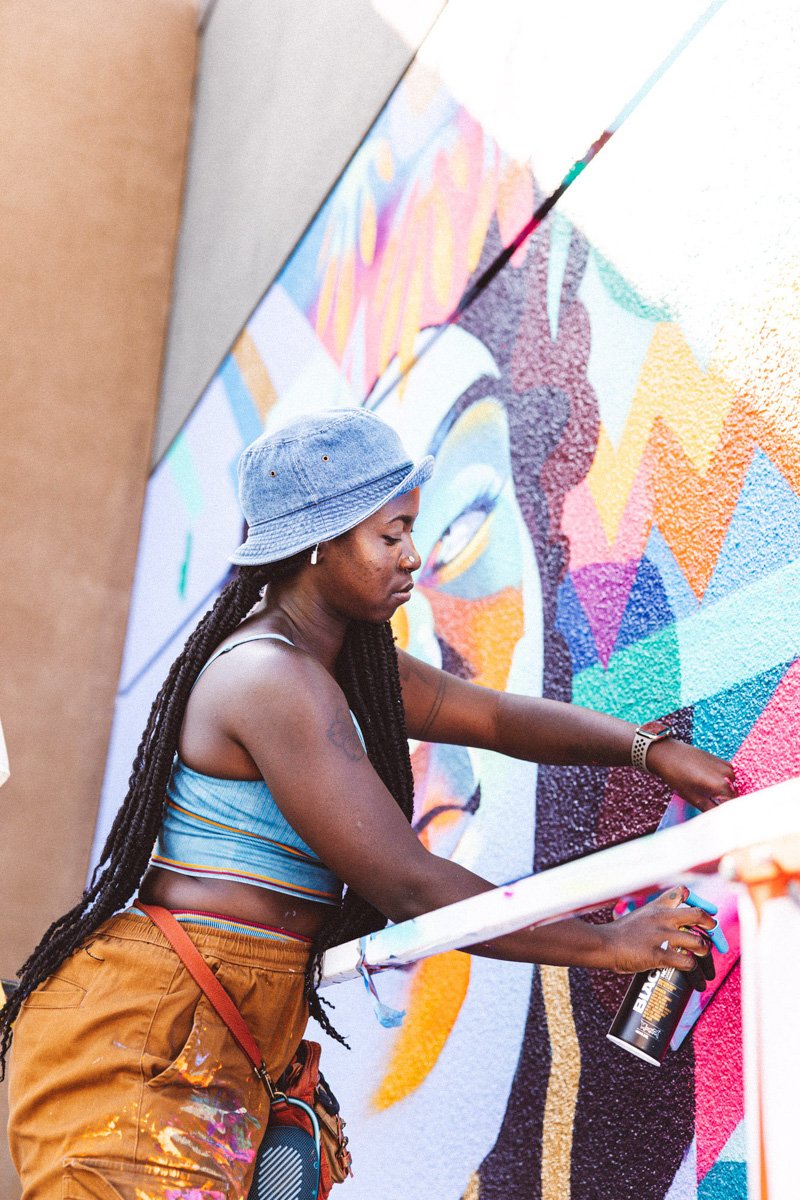 Two years ago, CCA alums Joey Rose and Alexandra (Alex) Underwood (both BFA Illustration 2017) began their journey to splash public art across Emeryville, California. The project is the local iteration of the international Sea Walls: Artists for Oceans mural project, which boasts over 400 murals across 18 countries to date. This September, Sea Walls Emeryville made its debut with 15 murals painted by local and international artists, each focusing on a distinct theme within the project’s larger goal of focusing our attention on the health of our planet’s oceans and our connection to the natural environment.

Underwood and Rose participated as artists in the Maui, Hawaii activation of Sea Walls, in Underwood’s hometown of Wailuku. “I think it was just so amazing to see the change in the community. There were really no murals, no public art there before,” says Underwood. “Just seeing the positive impact it’s had on the community spurred us to want to do it where we live now.”

When people think of Emeryville they often picture Pixar Studios, or the blue and yellow monolith of IKEA rising behind a freeway interchange. But that image both conceals and highlights for Rose and Underwood why Emeryville is emblematic of some of the issues that concern the environment in the Bay Area and California today. 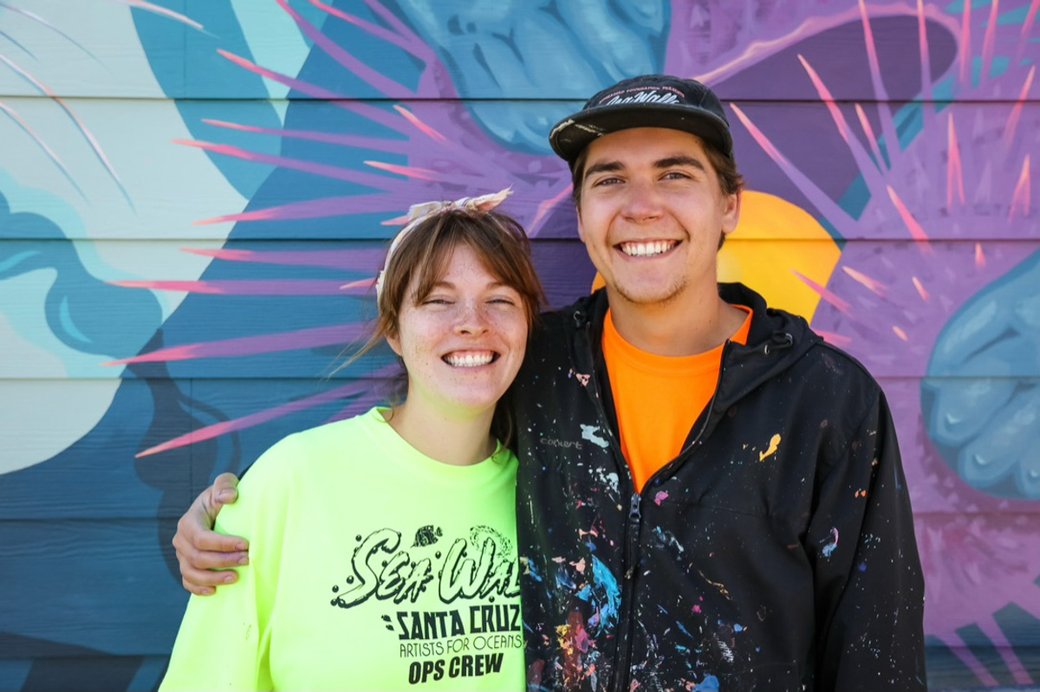 Alexandra Underwood and Joey Rose (both BFA Illustration 2017). Photo courtesy of the artists.

“We moved to Emeryville because I did a public art piece with the city about five or so years ago, and I was so struck with how much the city and community supports public art,” says Rose. “And then once we moved here we realized there was a marina right across the freeway. We’d walk our dog during the pandemic and notice this disconnect: the freeway cuts people off from the water.”

Rose and Underwood sought to change that narrative and focus on what connects people. After two years of planning and fundraising, Sea Walls Emeryville held its opening festivities on September 12 through 18, 2022. “Art is a tool to spark change,” says Rose. “I’m not a scientist, but the tool I have is art. Learning that art can change people’s minds, get people involved, that’s what this is all about.”

From the planet’s oceans to the San Francisco Bay

Murals created by Sea Walls: Artists for Oceans can be spotted all over the world in a wide range of communities, from the dense, urban streets of Toronto to the coasts of New Zealand, and from the Canadian Arctic to the beaches of Mexico. The creative outlet of the nonprofit organization PangeaSeed Foundation, Sea Walls “brings the message of ocean conservation into streets around the world.”

Each Sea Walls mural festival takes a local form, with murals commissioned under a set of regional themes and topics. Although Emeryville may seem like an unlikely place to examine our connection to the planet’s oceans, Rose and Underwood wanted to communicate that the city’s history and location at the edge of the San Francisco Bay make it a prime laboratory linking California’s waterways to the ocean and environment at large.

“The Bay Area is the second largest estuary on this side of the continent. It’s really an important thruway for different species of birds, different migratory fish,” says Rose. “These intersections of different habitats are some of the most biodiverse ecosystems we have. And it’s where we are, here in the Bay. We need to really make sure we protect it.”

Rose and Underwood curated a thematic palette for the 17 Sea Walls artists to draw from as they conceived their murals. These themes included local endangered species, sea level rise, pollution and landfill, environmental justice, and acknowledgment of Indigenous land stewardship. Rose says, “Each of the topics we chose for the murals specifically connects to the Bay as an ecosystem.”

Emeryville, like many other Bay Area cities, has contributed to the transformation of the San Francisco Bay shoreline—often with negative consequences. For a large part of the twentieth century, local industry used the Emeryville bayfront as a dumping site for production waste, eventually accumulating the bayfill upon which later structures were built. “There were plans to move landfill even further out into the Bay, but Save the Bay stopped it from happening,” says Rose.

Underwood adds that our past, present, and future are inextricably connected. “I think it’s important to educate people on what had happened and what is happening,” she says. “Communities like West Oakland are near sites of mass pollution, which disproportionately affect people of color, and lower income communities—a lot of times those communities, our communities, around the water are at the forefront of climate change.” 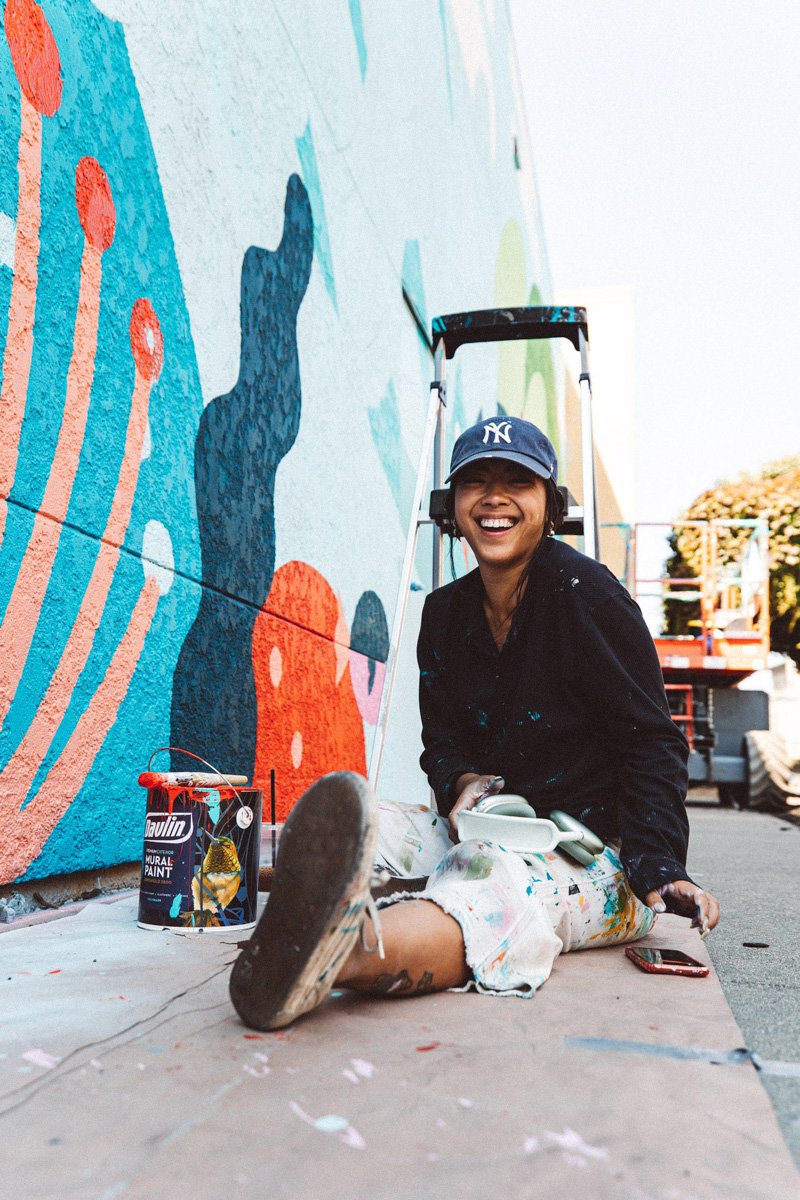 A new hub for murals with a message

The artists who brought Emeryville’s streets and walls to life with art include local and international creatives who came to the city to put their original take on the various themes connected to the San Francisco Bay ecosystem. Underwood says, “A lot of these artists were our icons while we were going to CCA and starting our mural careers. We really look up to these people, and were so excited to meet them in person.”

Steffi Lynn, an artist based in Austin and New York City, for instance, installed a mural at Powell Plaza (5707 Christie Avenue) to highlight Bay Area species at risk of extinction. Her bright, colorful work features endangered salmon, birds, and other marine species indigenous to the San Francisco Bay. “I was really excited to meet Steffi,” says Underwood. “I followed her throughout school. She has a huge following on Instagram [@haveanicedayy_], and is an amazing typography artist—she makes it look easy.”

Another muralist whose work focuses on endangered species is the British/South African artist Sonny Behan. (His work appears at 5400 Hollis Street.) Behan creates hyper-realistic images that can appear to leap off the wall. “I remember being on Instagram looking at Sea Walls artists all through school. Just aiming to be a Sonny Behan. He’s done many Sea Walls activations,” says Rose. 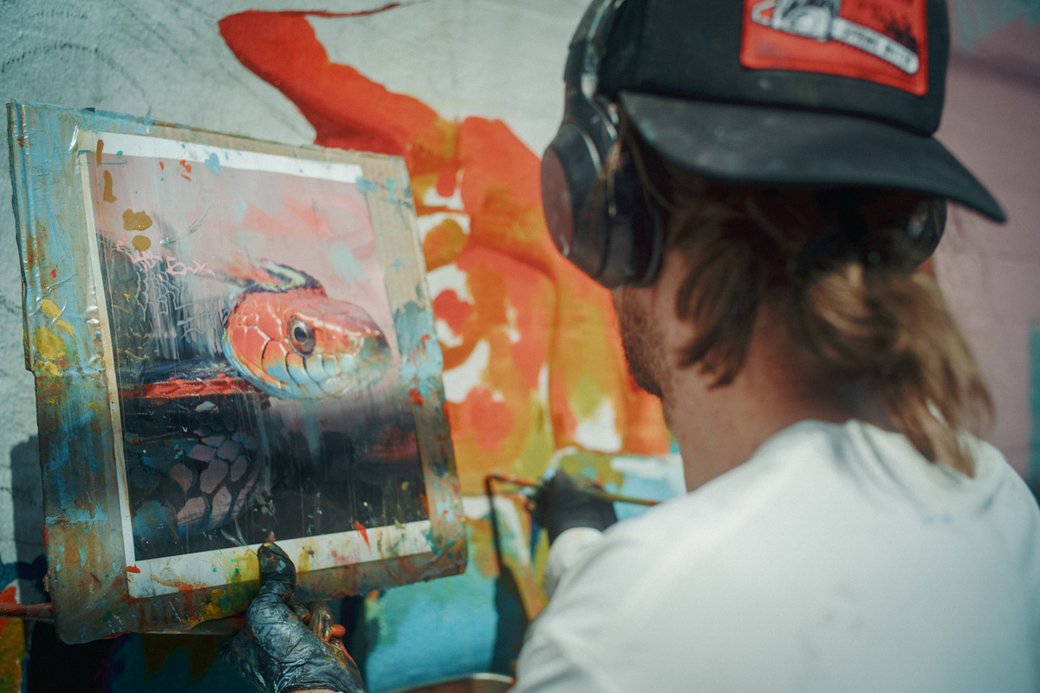 For Sea Walls Emeryville, Behan painted the San Francisco garter snake, a rare and endangered species found only in the Bay Area. Rose adds, “A lot of people didn’t originally realize what he was painting because the garter snake is so exotic looking with all these bright red and blue colors.”

Talented local artists were also instrumental in bringing their unique lens to Emeryville’s murals. One of the themes Rose and Underwood wanted to underscore, particularly connected to Emeryville, was the destruction of Indigenous sacred sites during the city’s industrialization and buildup. “We are on unceded Indigenous lands,” says Underwood. “And one of the largest archaeological sites in the Bay Area was here in Emeryville, and that was desecrated.” 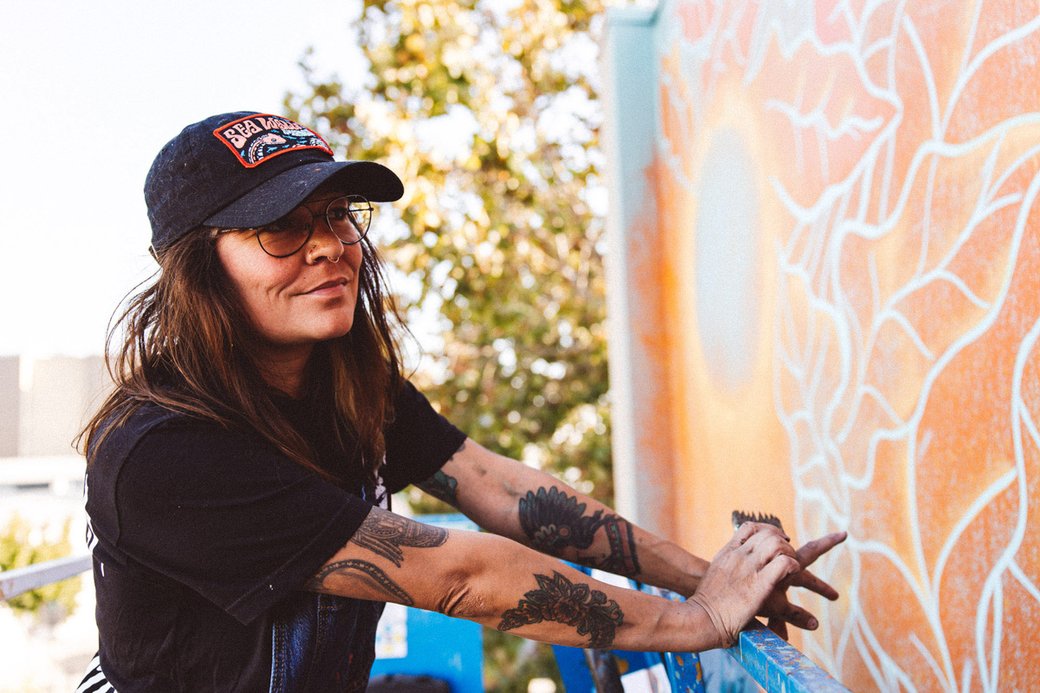 Oakland and Santa Fe–based artist Felicia Gabladon responds to this history in her mural at 1460 Park Avenue. “Felicia worked with Sogorea Te’ Land Trust, an Ohlone Indigenous-run, women-run organization working to protect Indigenous land here,” says Underwood. “And Felicia, who is Indigenous as well, added to her mural from that collaboration, which made a very impactful connection.”

On that same wall, San Francisco–based artist Apexer installed a work with recollections of the Emeryville mudflat sculptures. “He’s a pretty famous graffiti artist here in the Bay Area,” says Rose. “He grew up here and remembered these guerilla sculptures rising in the Emeryville marshlands.”

Rose and Underwood hope that the work the local community and visitors to Emeryville see on the walls of the city will inspire people to pause and think. “Hopefully this inspires some people to dig deeper into the history of the places they live,” says Rose. “We’re not separate from the ecosystem. I hope these murals inspire people to look into their community’s history, to educate themselves.”

The 15 murals by 17 artists now on view throughout Emeryville went up across one week in September, but it took nearly two years of painstaking planning, fundraising, and collaborating with local institutions and businesses to make it all happen. Rose and Underwood, muralists in their own right, created the space and the runway for this talented group of artists to do what they do best. Rose says, “The hardest part in organizing was trying to convince people that it was going to be really cool and have a great impact. Because if you haven’t seen one or seen these types of murals go up, it’s impossible to describe.” 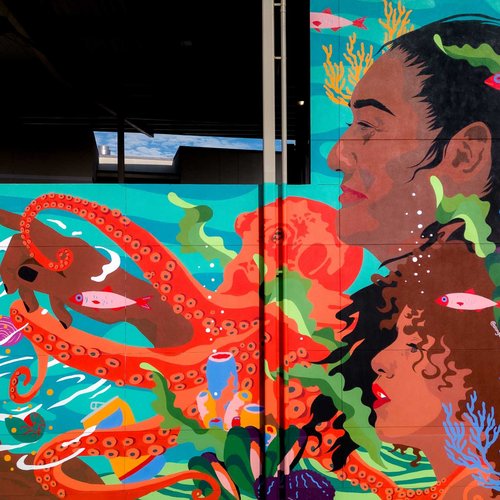 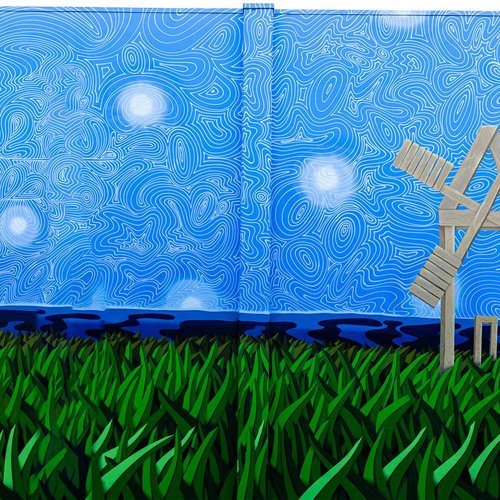 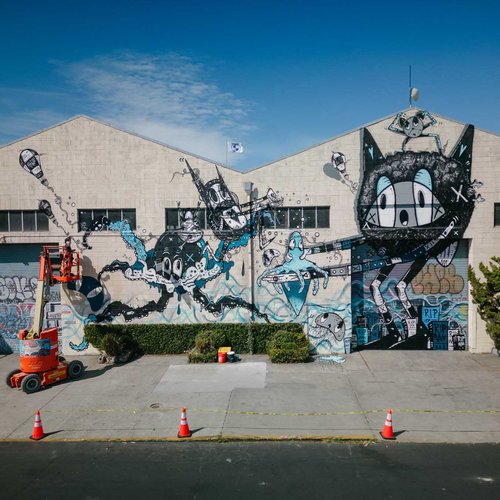 The artist Cracked Ink comments on stewardship of the San Francisco Bay. 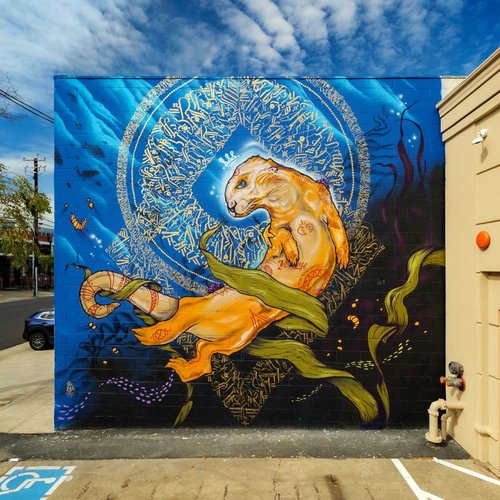 "We Were Here, We Will Return," a collaboration between artists Evan Wilson and Tay Reinhold. 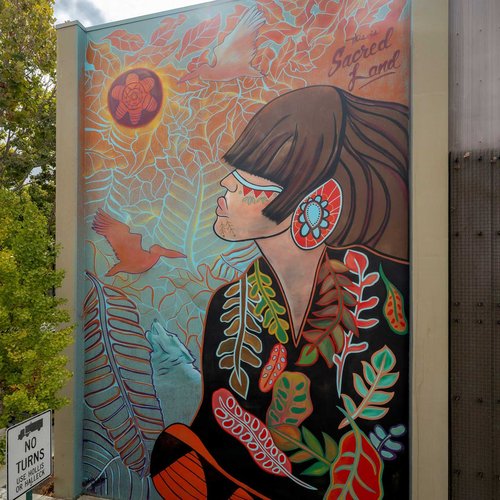 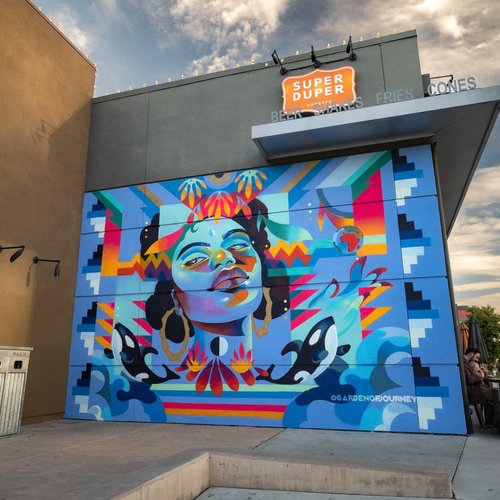 Sea Walls Emeryville murals can be found almost everywhere, including outside favorite shops and eateries. Mural by Georgie Nakima. 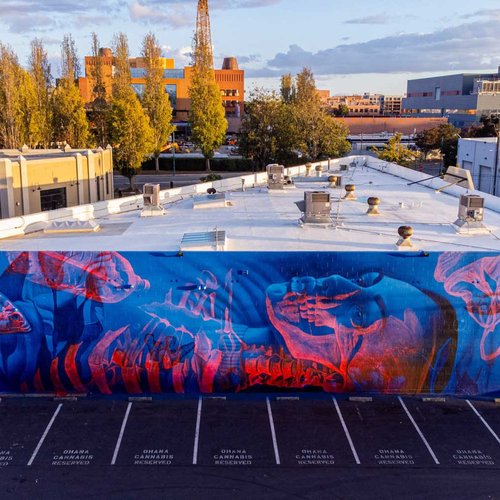 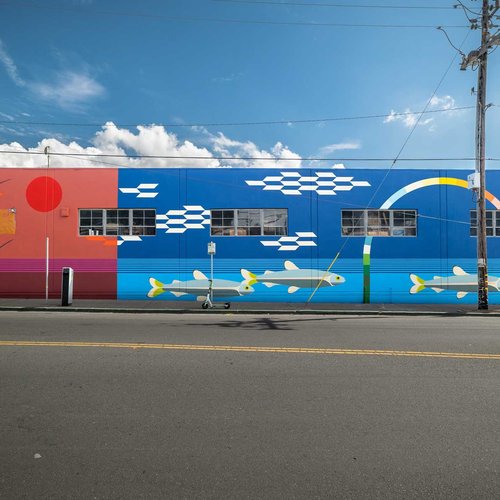 Kelly Ording’s "This Place, That Place" offers a moment to imagine the future of our waterways. 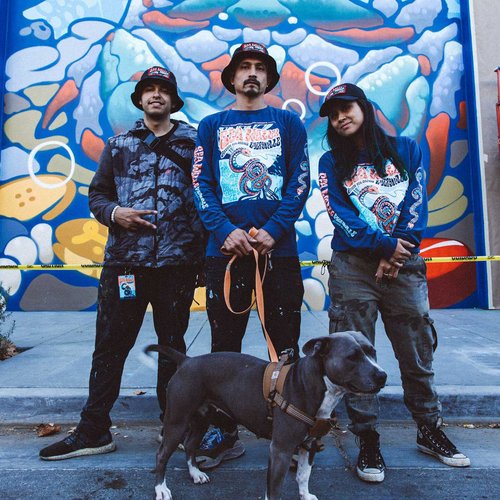 The Last Ones crew pose in front of their recently completed mural highlighting plastic pollution. 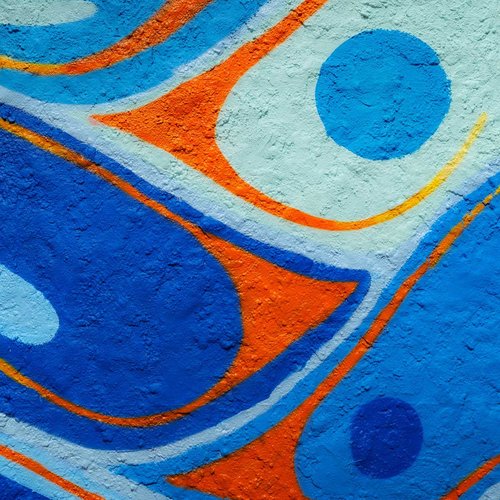 A detail of Mila Moldenhawer’s work which dazzles the entire facade of the restaurant Good to Eat Dumplings. 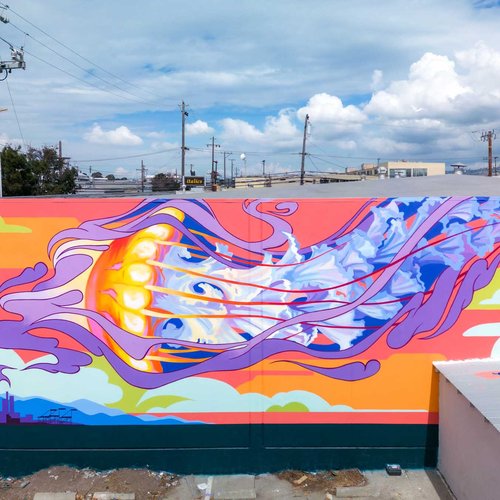 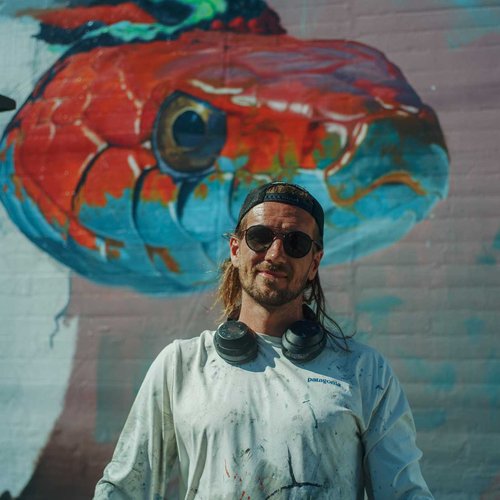 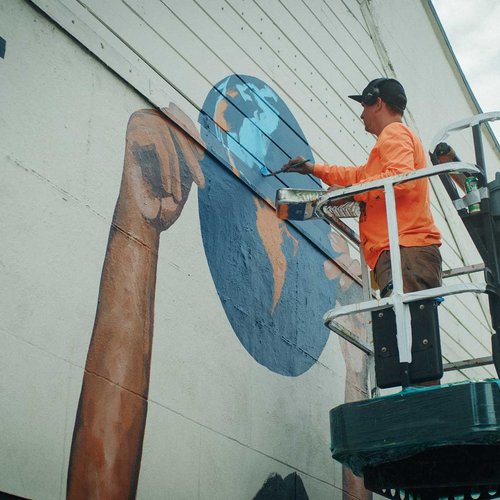 Rose and Underwood fundraised principally to finance Sea Walls Emeryville: to commission the murals, artist stipends, meals, and equipment and supplies. “I think one of the biggest things we learned was fundraising,” says Underwood. “Like Alex [Rose] says, it’s hard to explain to people the value of this project if they haven’t seen it firsthand. But I think we cracked the code a little bit. It’s all about who you know, and how to get in front of the right person.”

In the end, Emeryville came through to support Sea Walls. And on two days in mid-September, the murals made their debut to the public through walking tours, panel discussions, and a film screening at the Public Market. The nonprofit Sea Otter Savvy talked about sea restoration. The City of Emeryville held their annual beach cleanup. And noted guests and speakers included John Bauters, the mayor of Emeryville, and Amanda Phingbodhipakkiya, one of the Sea Walls Emeryville artists whose work graces Emery High School.

When asked about the project’s success, Rose and Underwood say, “We’re already getting phone calls from other building owners who now want art on their walls because of this project. We think we’re changing things for the better, particularly for artists. Hopefully it creates more opportunities for them in the Bay Area.”

The best way to get the full scope of the artists’ work, the murals, and the deeper messaging behind Sea Walls is to stop by Emeryville. Save this walking tour map and plan your visit.