The CCA People’s Party is an annual spring gala benefiting student scholarships for deserving young artists, designers, writers, and architects who otherwise could not afford to attend CCA. 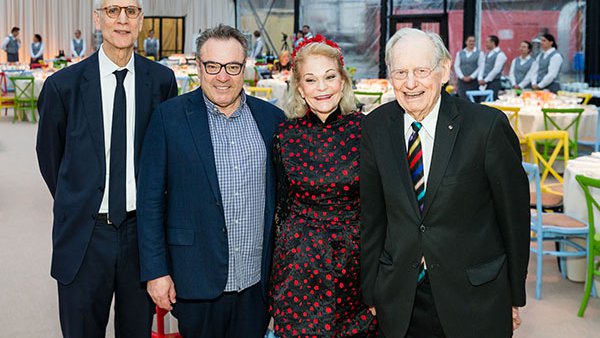 San Francisco, CA–March 27, 2019—California College of the Arts (CCA) drew 358 supporters to its San Francisco campus for a celebration benefiting CCA student scholarships and honoring Wayne Thiebaud, one of California’s greatest artists and educators. Mr. Thiebaud, who received an honorary doctorate in 1972 from CCA (then California College of Arts and Crafts), returned to campus for an evening of appreciation by long-standing patrons, museum directors, gallery owners, art collectors, artists, architects, renowned scholars, and CCA alumni, students, faculty, and staff. 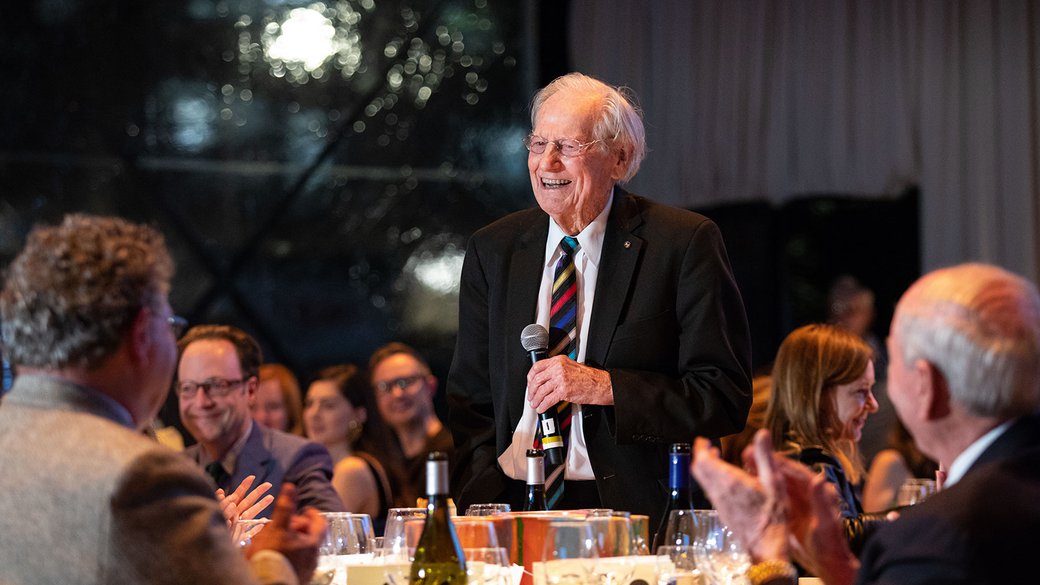 A video tribute featuring an exclusive interview with KQED Forum host Michael Krasny covered Mr. Thiebaud’s approach to being a painter, philosophies on being an artist, the importance of teaching, and his contributions to art history. A moving speech from CCA scholarship recipient Luis Arturo Gomez (Architecture 2023) showcased the importance of supporting young artists in the Bay Area, followed by an energetic real-time donation “raise the paddle” event hosted by Emmy Award–winning radio and television personality Liam Mayclem.

In a surprise close to the evening, a never-before-seen page from Mr. Thiebaud’s sketchbook was auctioned. The page included nine pen-and-ink drawings of compositional studies for his iconic paintings. This raised $42,000 as part of funds for student scholarships.

Following dinner, CCA President Stephen Beal kicked off the program by highlighting CCA’s major initiatives and the bright future ahead for the college.

“We’re working with MacArthur Award–winning architect Jeanne Gang to design our new campus, which will be a living, learning laboratory for creative experimentation in the heart of San Francisco,” stated President Beal. “This exciting future is possible thanks to the legacy of CCA faculty and alumni and by the world class, creative community in the Bay Area. Wayne Thiebaud is surely one of the most distinguished leaders of that community.”

“Through his work as an artist and educator,” recalled Mr. Nash, “[Wayne Thiebaud] has demonstrated that the practice of a professional artist is an elevated, esteemed, and gratified calling. His profound dedication to craft is what drives him to work in his studio almost every day of his life. His great modesty and his concern for art as a humanistic necessity make him an outstanding role model for any student.”

The evening then turned to celebrate the students who directly benefit from the school’s scholarships. Current CCA student Luis Arturo Gomez (Architecture 2023) spoke to the hard work it took for him to pursue a degree in architecture, the incredible experiences CCA offered him, and the indispensable help that student scholarships provided.

“When it came time to apply to college, I had my sights set on CCA for its architecture program. I applied and was accepted, knowing very well that we could not afford it,” said Mr. Gomez. “Now I am here, living this dream at CCA, and it has been everything that I imagined and hoped for. I know how lucky I am for this opportunity and I make the most of every day.”

CCA devotes 27 percent of its annual budget to student scholarships. Two of every three CCA students receive scholarship support of some kind. The college firmly believes that an excellent art and design education is only made possible with the inclusion of diverse persons and perspectives on campus and that financial barriers should never prevent any talented, committed student from enrolling at CCA.

To achieve this goal, CCA dedicates significant institutional resources to need-based aid, with the scholarship fund being its highest fundraising priority.

Wayne Thiebaud (b. 1920 Mesa, Arizona) is an award-winning American painter and university educator based in Northern California. Mr. Thiebaud gained national and international acclaim in the 1960s as a painter of American confectionaries, landscapes, cities, and people. His innovative painterly style straddles two major art movements—Realism and Pop Art—creating a unique artistic voice rooted in the West Coast. As he gained notoriety as a painter, he remained a passionate and dedicated arts educator at the Department of Art at the University of California, Davis, where he cultivated a career as a highly respected professor until his retirement in 1991. In time at UC Davis, he was named Distinguished Art Studio Teacher of the Year by the College Art Association of America for his teaching and mentorship that has impacted generations of younger artists across California and the nation.

Mr. Thiebaud has received numerous civic awards in recognition of his prolific painting career. The city of San Francisco has presented him with the San Francisco Arts Commission Award of Honor for distinguished services in the arts in 1987. The same year, the San Francisco Chamber of Commerce awarded him the Cyril Magnin Award for Outstanding Individual Achievement in the Arts. In 1991, the state of California bestowed Mr. Thiebaud with the Governor's Award for Lifetime Achievement in the Arts. Then, in 1994, he received the National Medal of Arts Presidential Award from President Bill Clinton.

Major art institutions and galleries in the Bay Area, such as SFMOMA, Legion of Honor, de Young Museum, Oakland Museum of Art, San Jose Museum of Art, and Berggruen Gallery, continue to collect and present Wayne Thiebaud’s artwork to Bay Area audiences to this day.