The Wattis Institute presents Josh Faught: Look Across the Water Into the Darkness, Look for the Fog

Curated by Kim Nguyen, the exhibition of new works by Bay Area-based artist Josh Faught uses the vernacular of the AIDS epidemic as a conceptual springboard toward a larger conversation around the complex ways in which queer bodies negotiate trauma, time, intimacy, joy, and resilience. 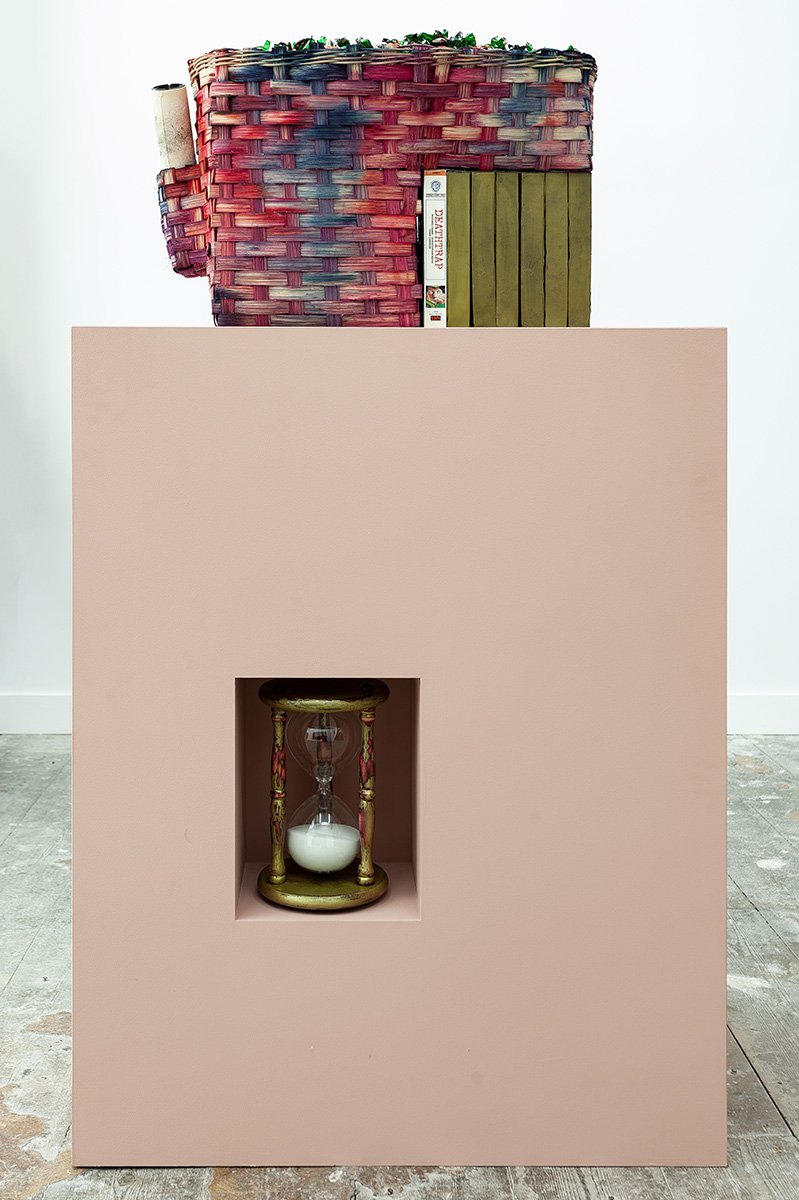 Faught’s first major institutional exhibition in the Bay Area since 2013, Look Across the Water Into the Darkness, Look for the Fog is curated by Kim Nguyen and consists of a series of handwoven, crocheted, and dyed works that articulate the often ambivalent relationships between material, language, and community. The title of the exhibition is a quote from the 1980 supernatural horror film, The Fog, directed by John Carpenter and filmed in Marin County, California.

Thematically, the works in the exhibition revolve around concepts of time, exposure, and transition: restlessly oscillating between moods; between light and dark; between mourning, witness, and flamboyance. Central to the exhibition is the presentation of a 30-foot wide woven wall-based work: an abstraction appropriated from the candlelight flicker seen in an archival image of an AIDS vigil held in San Francisco during the late 1980s. Woven with natural hemp in shades of black, the work’s color “fades out” along its right edge as though it’s been overexposed by the glare of a camera flash.

Throughout the exhibition appear a series of hand-dyed, hand-woven, “ticker tape-like” strips of text. Each text reads as a series of lists: decontextualized and appropriated from three publications: Lavender Lists by Lynne Yamaguchi Fletcher and Adrien Saks (1990), the Unofficial Gay Manual by Kevin Dilallo and Jack Krumholtz (1994), and the Gay Book of Lists by Leigh W. Rutledge (1987). Written in an ambivalent tone that oscillates between humor and support, each of these books attempts to identify and locate gay male culture through outdated language, materials, and objects. In addition to the language-based works, a series of other sculptural textile objects punctuate the exhibition. These objects accommodate found ephemera, books, pamphlets, and bootleg DVDs sourced from queerly identified sellers. Collectively these works speak both to the idiosyncratic ways in which we fill time as well as to a parallel cultural moment (in the 1990s) when conversations around the body politic overlapped with an existential illness and shared feeling of paranoia.

Continuing Faught’s ongoing interest in triangulating the spaces between personal history, social/political history, and the history of textiles, the exhibition operates from the premise that if political rhetoric is, at its core, a desire to communicate, the ability to speak through textiles allows us to embrace a personal/political continuum that is at once fragmentary, experiential, and physical. Look Across the Water Into the Darkness, Look for the Fog uses the vernacular of the AIDS epidemic as a conceptual springboard toward a larger conversation around the complex ways in which queer bodies negotiate trauma, time, intimacy, joy, and resilience.

Josh Faught: Look Across the Water Into the Darkness, Look for the Fog is curated by Kim Nguyen and organized by Diego Villalobos. 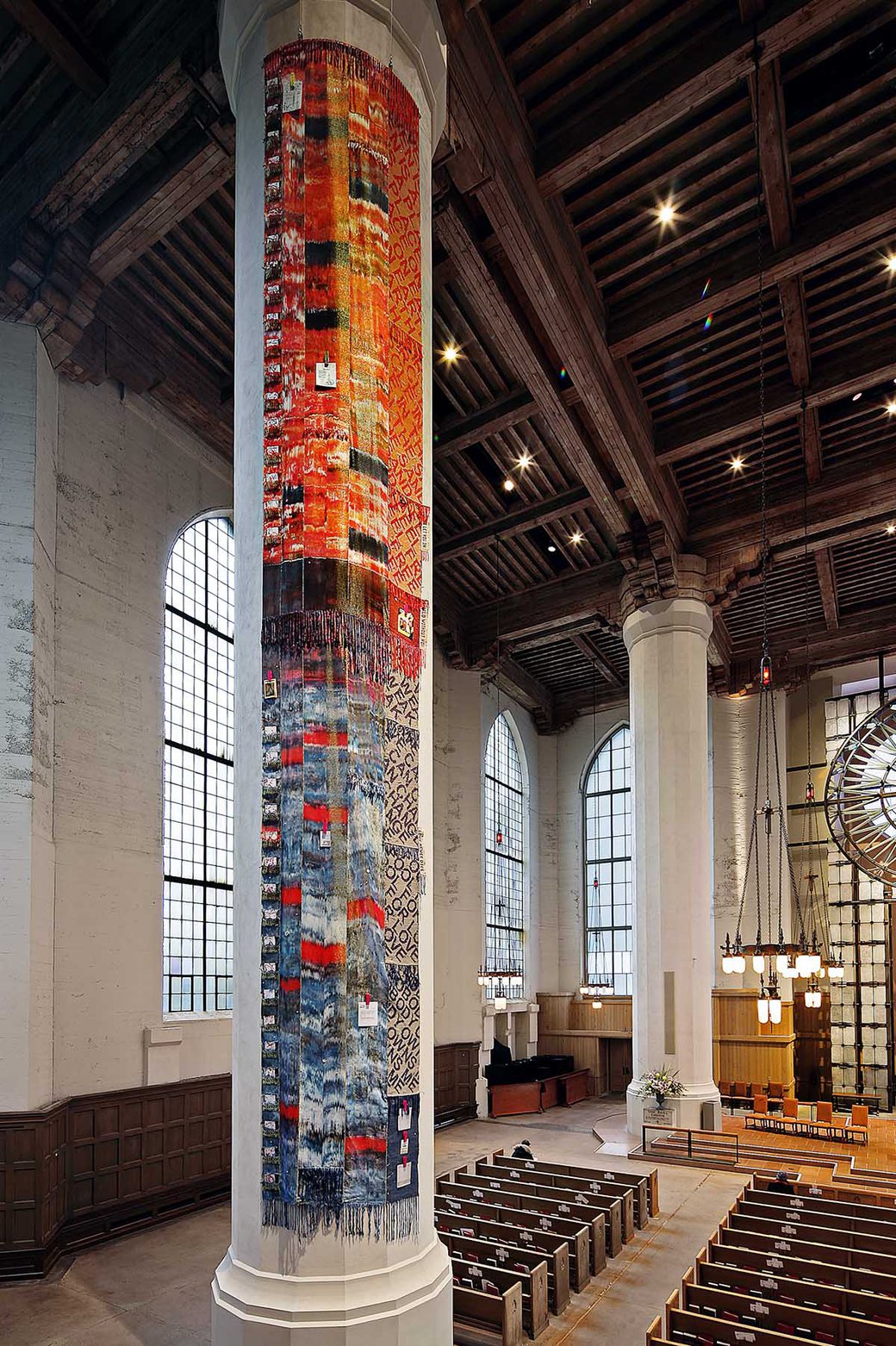 For the past 16 years, Josh Faught has mined the profound ways in which textiles and craft function as a means of mobilization, survival, and support. His multifaceted practice combines textiles, pop-cultural detritus, and archival materials to address the relationships between language, community, and constructions of identity. Faught considers textiles to be a complicated, conditional, and often meandering form of manifesto writing. Unlike traditional written manifestos, however, he is invested in the ways that textiles complicate our understanding of address and abstraction, asking how we can say something urgently through the slowest means possible.

Recent solo museum exhibitions include a site-specific installation at the Neptune Society Columbarium as part of the SFMoMA SECA Art Award Exhibition (2013); the Contemporary Art Museum St. Louis (2013); and the Seattle Art Museum in conjunction with the Betty Bowen Award (2009). Solo exhibitions also include Koppe Astner, Glasgow ( 2019); Casa Loewe (2019); Kendall Koppe, Glasgow (2014) and Lisa Cooley, New York (2010, 2012, and 2014). His work has appeared in numerous group exhibitions, including at the New Museum, New York (2017); Casas Riegner Gallery, Bogota (2018) Sadie Coles HQ, London (2018); the Saatchi Gallery (2018); the Contemporary Arts Museum, Houston (2014); and the Institute of Contemporary Art, Boston (2014). In 2017, Faught also produced a site-specific work for St. Mark’s Cathedral in Seattle, commissioned by Western Bridge. Faught’s work has been featured in the New York Times, Artforum, and Art in America, among other journals and publications. Faught is the recipient of the 2009 Seattle Art Museum Betty Bowen Award, the 2011 Louis Comfort Tiffany Foundation grant, the 2012 San Francisco Museum of Modern Art Society for the Encouragement of Contemporary Art Award (SECA), the 2016 Artadia Award, and the 2016 Eureka Award from the Fleishhacker Foundation. Faught is a Professor at the California College of the Arts in San Francisco and Oakland.

Founded in 1998 at California College of the Arts in San Francisco and located a few blocks from its campus, CCA Wattis Institute for Contemporary Arts is a nonprofit exhibition venue and research institute dedicated to contemporary art and ideas. As an exhibition space, it commissions and shows new work by emerging and established artists from around the world. Recent solo exhibitions include Maia Cruz Palileo: Long Kwento, Jeffrey Gibson: Nothing Is Eternal; Lydia Ourahmane: صرخة شمسية Solar Cry; Cinthia Marcelle: A morta; Vincent Fecteau; Abbas Akhavan: cast for a folly; Akosua Adoma Owusu: Welcome to the Jungle (which traveled to the Contemporary Arts Center of New Orleans); Diamond Stingily: Doing the Best I Can; Rosha Yaghmai: Miraclegrow; and Adam Linder: Full Service (which traveled to Mudam Luxembourg). A recent group exhibition, Mechanisms, traveled to Secession in Vienna in an expanded form entitled Other Mechanisms.

As a research institute, the Wattis dedicates an entire year to reflect on the work of a single artist, which informs a regular series of public programs and publications involving the field’s most prominent artists and thinkers. The 2021–2022 season is dedicated to the artist Lorraine O’Grady; past seasons featured Joan Jonas, Andrea Fraser, David Hammons, Seth Price, Dodie Bellamy, Trinh T. Minh-ha, and Cecilia Vicuña.