Today, Time Magazine released its TIME 100: Most Influential People of 2019, with architect and MacArthur Fellow Jeanne Gang, founding principal of Studio Gang, as the only architect included on this year’s list. Gang is a pioneering architect, champion of gender equity, leader on sustainability, and one of the few women to reach the highest echelons of a historically male-dominated field. Gang was recently selected for the $8.5 billion Chicago O’Hare International Airport expansion, becoming the first woman to design a major U.S. airport terminal.

In November 2016, California College of the Arts (CCA) selected the award-winning architecture firm Studio Gang to design a new, expanded campus that will bring all of CCA’s 2,000 students and programs together for the first time in San Francisco. CCA and Studio Gang will create a living, learning laboratory—a new kind of academic space for makers and thinkers—that will accommodate everything from traditional to experimental practices and serve as a model of sustainability. In addition, CCA has been a trailblazer in creating student housing. With the opening of Blattner Hall in September 2018 and the groundbreaking of 188 Hooper in February 2019, CCA is on track to house nearly half of its student body by 2020. 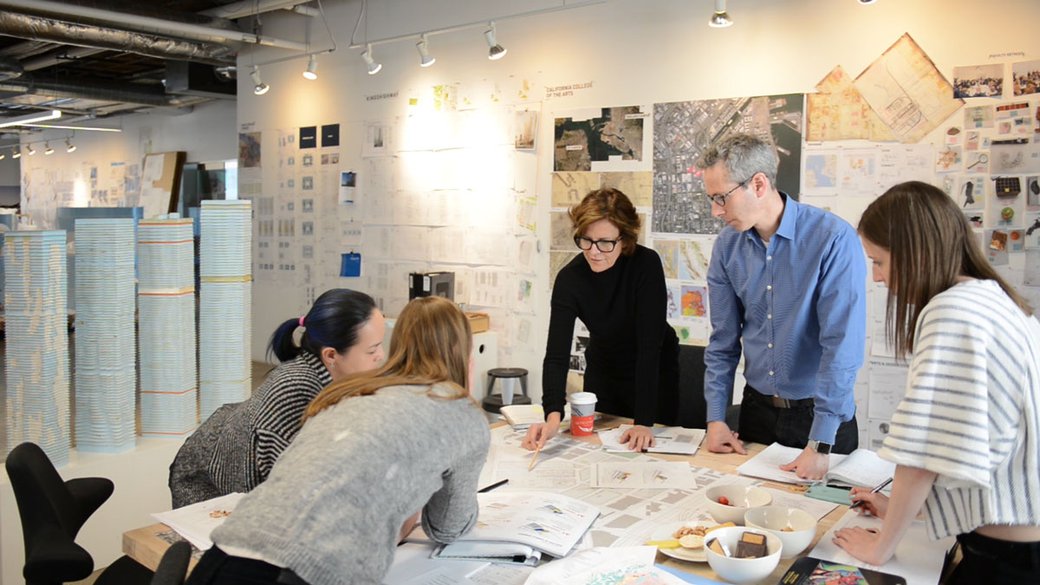 Jeanne Gang and her team of architects work on the model for the new CCA campus.

“I am incredibly proud to be working with Jeanne Gang, who is much-deserving of this international recognition,” says CCA President Stephen Beal. “She is a true innovator who upholds the highest standards of social and environmental responsibility in all that she does. CCA is grateful to have Jeanne and her extraordinary team play such a key role in the next era of our college’s history.”

In addition to her ever-growing roster of projects, Gang is committed to fighting discrimination and prejudice within the field of architecture. After participating in the impromptu Voices of Women protest at the 2018 Venice Architecture Biennale, in which Studio Gang exhibited, she returned home and closed the gender wage gap at her firm. In an article penned for Fast Company, she offered assessment tools to her architecture colleagues and called on them to fix pay inequity now. Gang is not only changing the landscape of our cities, but crucially leveling the terrain of the architecture industry for future generations.

Architect and MacArthur Fellow Jeanne Gang, FAIA, Int. FRIBA, is the founding principal of Studio Gang. A member of the American Academy of Arts and Sciences and a Chevalier de l’Ordre national de la Légion d’honneur, Jeanne is internationally renowned for a design process that foregrounds the relationships between individuals, communities, and environments. Her diverse body of work spans scales and typologies, expanding beyond architecture’s conventional boundaries to pursuits ranging from the development of stronger materials to fostering stronger communities. Her approach has resulted in some of today’s most compelling architecture, including Aqua Tower, the Arcus Center for Social Justice Leadership, and Writers Theatre. She is currently designing major projects throughout the Americas and Europe, including the Gilder Center for Science, Education, and Innovation at the American Museum of Natural History in New York; a unified campus for California College of the Arts in San Francisco; and the new United States Embassy in Brasilia, Brazil.

A recipient of the 2013 National Design Award (Cooper Hewitt, Smithsonian Design Museum), Jeanne was named the 2016 Architect of the Year by the Architectural Review. In 2017, she was honored with the Louis I. Kahn Memorial Award and made an honorary fellow of the Royal Architectural Institute of Canada. Widely published and acclaimed, her work has been exhibited at the Venice Architecture Biennale, Chicago Architecture Biennial, Museum of Modern Art, and Art Institute of Chicago. She is the author of Reveal, the first volume on Studio Gang’s work and process, and Reverse Effect: Renewing Chicago’s Waterways, which envisions a radically greener future for the Chicago River.

Jeanne is a distinguished alumna of the Harvard Graduate School of Design, where she was recently appointed Professor in Practice. She lectures frequently throughout the world and serves on various civic and design-focused committees and advisory groups.

CCA offers a rich curriculum of 22 undergraduate and 11 graduate programs in art, design, architecture, and writing taught by a faculty of expert practitioners. Attracting promising students from across the nation and around the world, CCA is one of the 10 most diverse colleges in the U.S.

Graduates are highly sought-after by companies such as Pixar/Disney, Apple, Intel, Facebook, Gensler, Google, IDEO, Autodesk, Mattel, and Nike, and many have launched their own successful businesses. Alumni and faculty are often recognized with the highest honors in their fields, including Academy Awards, AIGA Medals, Fulbright Scholarships, Guggenheim Fellowships, MacArthur Fellowships, National Medal of Arts, and Rome Prize, among others.

CCA is creating a new, expanded college campus at its current site in San Francisco spearheaded by the architectural firm Studio Gang. The new campus design will be a model of sustainable construction and practice; will unite the college’s programs in art, crafts, design, architecture, and writing in one location to create new adjacencies and interactions; and will provide more student housing than ever before.