Curated by CCA Graphic Design Chair Rachel Berger, Shooter Box is an exhibition protesting the United States military’s use of Microsoft Xbox controllers as battle equipment, which transforms a child’s toy into a weapon of war. 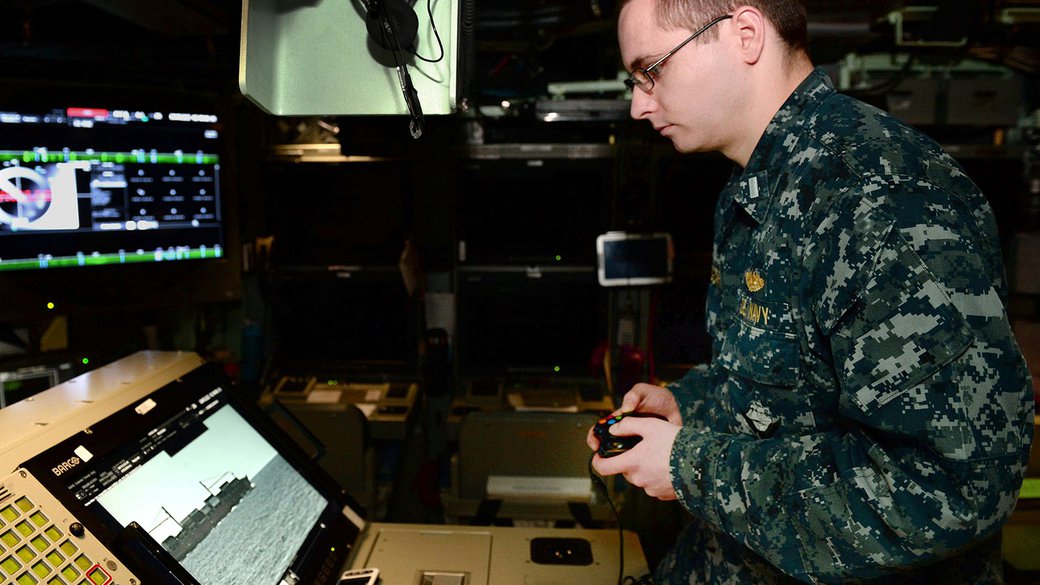 In this Feb. 2, 2018, photo released by the U.S. Navy, Lt. j.g. William Gregory uses an Xbox game controller to maneuver the photonics mast aboard the submarine scheduled to be commissioned as the USS Colorado on Saturday, March 17, 2018, in Groton, Conn. Photo by Steven Hoskins/U.S. Navy via AP.

San Francisco, CA—Thursday, August 19, 2021—California College of the Arts (CCA) presents Shooter Box (September 1–October 8, 2021), an exhibition of designed objects protesting the United States military’s use of Microsoft Xbox controllers as battle equipment. The exhibition also features a selection of videos, objects, and other cultural artifacts that inspired these works.

The United States military has been integrating Microsoft Xbox video game controllers into battle equipment for more than a decade. Officials tout the ergonomic, cost savings, and training advantages of the cheap off-the-shelf controllers—soldiers who grew up playing Xbox can teach themselves its military applications within minutes. Unfortunately, the controller is inscribed with far more significant meanings and values than the military acknowledges. It is a child’s toy transformed into a weapon of war.

Influenced by Bruce and Stephanie Tharp’s scholarship on discursive design—design with conceptual, rather than commercial, intentions—objects in the exhibition challenge visitors to consider the consequences of commingling war and games. The centerpiece of the show is Rachel Berger’s Bullet I, an Xbox controller cast in lead and copper. “The military is cynically repurposing a popular toy on behalf of the American war machine,” says Berger. “I wanted to create an object that would embody the weight of war.” Berger initially chose to work with lead because it is one of the heaviest common metals. Berger’s controller weighs six pounds, 10 times the weight of the original controller. Lead is also highly toxic. Its use in many commercial applications has been banned, but it remains a popular means of producing homemade bullets.

Please note: Currently, the CCA Hubbell Street Galleries are only open to CCA students, staff, and faculty with proof of vaccination. Faculty may arrange class visits to the Galleries by emailing [email protected].

Rachel Berger is chair and associate professor of Graphic Design at California College of the Arts. In her creative practice, she investigates the relationship between design and culture through self-initiated creative projects, writing, and work with nonprofit organizations. In 2021, she received a Berkeley Civic Arts Commission grant. She is a 2020 LABA fellow. Her writing has been published by Bloomsbury, MIT Press, AIGA Eye on Design, and Design Observer. She holds an MFA in Graphic Design and a BA in American Studies, both from Yale University.

Joseph DeLappe is the professor of Games and Tactical Media at Abertay University in Dundee, Scotland where he relocated early in 2017 after 23 years directing the Digital Media program at the University of Nevada, Reno. A native San Franciscan, he has been working with electronic and new media since 1983. His work in online gaming performance, sculpture, and electromechanical installation have been shown throughout the United States and abroad—including exhibitions and performances in Australia, the United Kingdom, China, Germany, Spain, Belgium, the Netherlands, Mexico, Italy, Peru, Sweden, and Canada. He has lectured throughout the world regarding his work, including the Museum of Modern Art in New York City. His works have been featured in the New York Times, the Australian Morning Herald, Artweek, Art in America, and in the 2010 book from Routledge entitled Joystick Soldiers: The Politics of Play in Military Video Games among many others. He has authored two book chapters, including “The Gandhi Complex: The Mahatma in Second Life” in the book Net Works: Case Studies in Web Art and Design (New York, Routledge 2011) and “Playing Politics: Machinima as Live Performance and Document” in the book Understanding Machinima Essays on Filmmaking in Virtual Worlds (London, UK, Continuum 2012). In 2017 DeLappe was awarded a prestigious Guggenheim Fellowship.

Sung Jang is a graduate of the School of the Art Institute of Chicago with a fine arts degree and Domus Academy in Milano with a Masters in Design. Sung began his design career in Milano at Samsung Design Milano before taking on a teaching career as a faculty at the School of the Art Institute of Chicago's Designed Objects program. Since 2013, Sung has served at the University of Illinois at Chicago's School of Design as an assistant professor and director of undergraduate studies to the Industrial Design program. Sung has worked with international brands such as Louis Vuitton, Guzzini, and Roche Bobois and been represented internationally at Venice Biennale, Design Miami, Victoria and Albert Museum, Volume Gallery, Armory Show, and Chamber NYC, among others.

Brian McMullen lives with his sons Alton and Molloy in rural Indiana.

John Colle Rogers is a sculptor and blacksmith based in Oakland, CA. He has used military materials and firearms to create objects which indulge in and critique the uses and abuses of power. The many veins of his investigations include watercolors of his character the Raccoonicorn, installations detailing the takeover of various arts organizations by his phantom company JohnKo Systems Unltd, and his multi-decade involvement with the performance group Survival Research Laboratories. Rogers graduated from California College of Arts and Crafts in 1997 with an MFA in Sculpture.

This exhibition features an object made out of lead, a chemical known to the State of California to cause birth defects or other reproductive harm. Exposure to lead and lead compounds may increase cancer risk. Avoid handling or wash hands after handling.