Sketch for “The Town” logo and uniform for the Golden State Warriors by Dustin Canalin.

From CCA to the NBA: Dustin O. Canalin on designing his dream career

With a passion for basketball and an eye for design, this Bay Area-born alum is living what he loves. 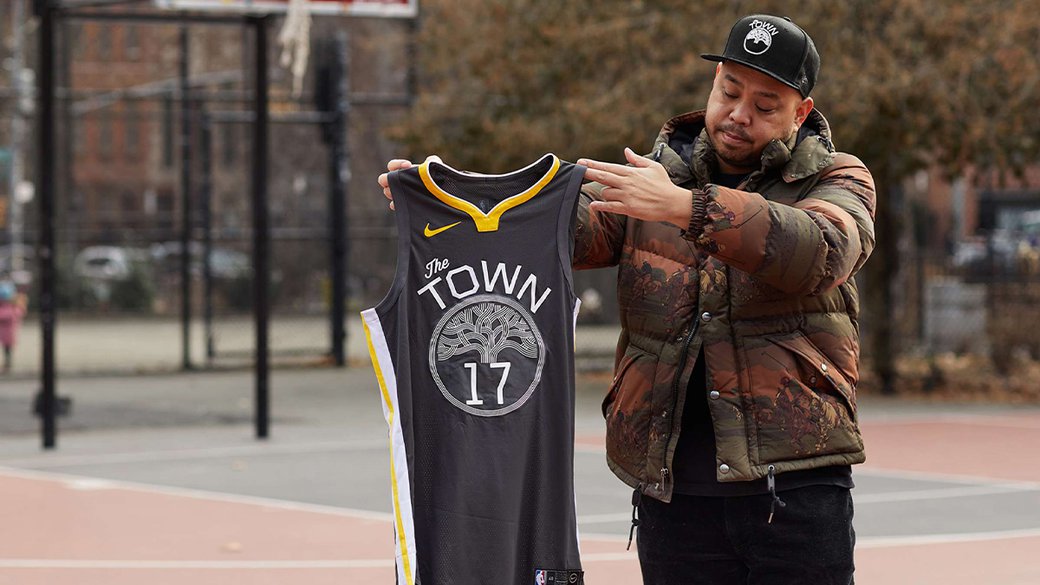 Dustin Canalin with the Golden State Warriors City Edition jersey he designed for Nike. The jersey honored the Warriors’ Oakland roots in their final season at Oracle Arena.

If you’ve ever watched an NBA game, you’ve seen Dustin Canalin’s work. If you’re a Golden State Warriors fan, you’ve probably worn it. Born and raised in the Bay Area, Canalin (Graphic Design 2000) created the Warriors’ iconic “The Town” logo and uniform, released to honor their last season in Oakland. He’s also designed uniforms for the Chicago Bulls, Philadelphia 76ers, Brooklyn Nets, and others. Stephen Curry regularly rocks his streetwear looks, and he’s the vision behind athlete brands including Lebron James, Giannis Antetokounmpo, Kevin Durant, and Kyrie Irving. Nike, Puma, adidas, Under Armour, Converse, Jordan Brand, and others bear his creative mark. He founded apparel companies UNDRCRWN and Trophy Hunting, and has ranked twice in Complex Magazine’s list of “50 Greatest Streetwear T-Shirts of All Time.” So when he wanted to rep his school in a CCA hoodie on his Saturday-morning coffee run—and couldn’t find one to buy—he did what he’s done his whole career: He made a connection, and made his own way.

The result is CCA by DOC, a capsule collection featuring a hoodie, crew, and t-shirt Canalin designed for California College of the Arts, which he credits with giving him the foundation upon which he’s built his creative career. As the collection was in production for an August 27, 2021 drop (you can find it at ARCH Art Supply in San Francisco or online), Canalin talked with us via Zoom about his career, his time at CCA, and his Bay Area roots. 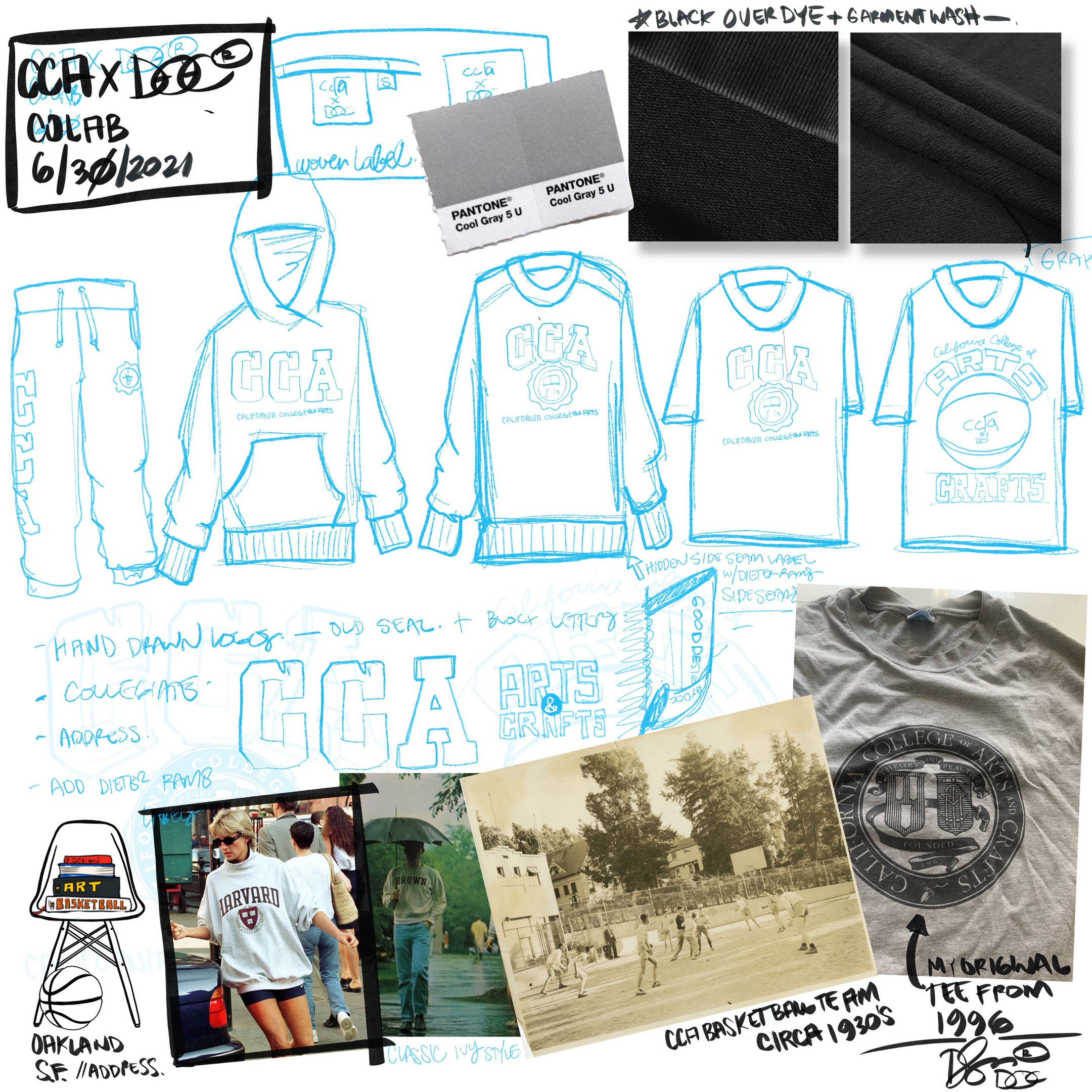 Q. You’ve been passionate about both art and sports all your life. How did those passions lead you to CCA?

A. I grew up in Alameda right next to a park, and my whole childhood was spent at baseball fields and basketball courts. I thought I would pursue sports, but I was also always interested in the sneakers, the uniforms, the hats, the clothes—everything that went culturally with the sport. In high school I followed what sneakers were going to come out or what uniforms people were wearing or what commercials were happening. I was introduced to a lot of art, design, culture through that. It was the ’90s, and Nike was building their brand in real time around signature athletes, Michael Jordan. I found out that an agency called Wieden+Kennedy was behind a lot of their advertisements. This was pre-internet, so I was asking around, doing the research I could do to find out more about them. I used to write letters to them and say, hey, I want to know more. I was finding out what agencies did, what graphic designers did.

My uncle was an illustrator who’d gone to CCA—Edward Canalin (BFA Illustration 1982), he’s a creative director now—and I remember seeing his illustrations and sneaking into his room, smelling the markers and thinking, this is so cool. He was a huge influence. So I applied to CCA, I was accepted, and I showed up on the Oakland campus, 18 years old, not knowing a thing. It was culture shock taking studio classes with chalk, and life drawing, and fine art. It was so overwhelming! I didn’t do really well my first year because I couldn’t see how to connect it to a career, and I was ignorant to a lot of the art world. It was coming so fast, and the people were so different.

“The CCA critiques were nuts; it’s like you step up there and there are 60 people ready to shoot holes through your project.”

Q. It sounds like you had a kind of bumpy start. How did you make it work?

A. My time there was spent literally trying to incorporate my own DNA into all the projects. It was just natural for me to incorporate sports into my work, basketball specifically. I knew about sports and basketball, so I applied the type of philosophy and concepts I was learning to that. Like when we did a book project, I made a book about Nike. We went through all the steps of breaking out the table of contents, how the hierarchies work, and all those things, but I got to apply those concepts to something I loved. And I was still very literal, in like, okay, I need to get a job after this. My classmates would say, oh, here he goes again with basketball, and they would really challenge me in critiques. The CCA critiques were nuts; it’s like you step up there and there are 60 people ready to shoot holes through your project.

I remember in one of my first critiques someone didn’t know who Michael Jordan was—and at the time he was the second most famous person alive next to the pope. That made me understand that as a communicator, I have to be aware that not everyone knows what I know. That was a lesson I use to this day, knowing who your audience is and understanding all the pieces that come into play. Looking back, I think it made me really understand why I would do things, it made me very purposeful in my design and craft, to be sure that I can fight off all the critics. My time at CCA was intense, but I learned so much. And I use it every day.

A. Well, now I sit in meetings with the president of the Warriors and I get to talk about uniforms or sneakers, and I have the confidence to be there. You know, I didn’t get a law degree from Harvard, but because of the projects I’ve worked on, the research I’ve done, the community I know, I have something to bring to the table. I can sell my ideas in spaces that are different from those I know, to people who aren’t like me. It’s a different language, but there’s still a commonality there.

Q. You dove right into a very competitive industry right out of school. What was that experience like?

A. I left school and went to work at a startup company called And1 in Philly. I didn’t know anything about them, but I was one of their first designers. It was kind of like my master’s degree in sports apparel and footwear, I was able to learn new aspects of design, concepting, and communicating through different mediums like footwear design, shoe boxes, t-shirts, apparel. In school, it was like 80% design and 20% making it, where in the real world it was reversed—20% design and 80% figuring out how to make it at the right price on time.

I was able to learn about the trade, and travel, and it put me into this space where it was like, okay, I love basketball and I love design, and I put those together. Now what else can I do? I went to work in New York for some streetwear companies that were pretty big at the time, Zoo York and Ecko Unltd. Then I went back to And1 and pitched them to let me combine my experience in fashion and my understanding of basketball to create my own product category. But before it got to be produced, And1 was sold. So in 2005 I started my own company called UNDRCRWN. It was one of the first basketball companies that looked at the lifestyle and the culture of the sport versus playing the sport.

Q. After running UNDRCRWN for about 10 years, you were recruited to Nike—the brand that had inspired you when you were a kid, when you were writing letters to Wieden+Kennedy. What prompted that move?

A. I was recruited to design for Nike when they signed a deal to work with the NBA; it was like my dream job. I said the only thing I need out of this job is to be able to design the Golden State Warriors uniforms. As a huge fan and a hometown boy, I was like, I’ll fight anyone—this is mine! And it was probably the hardest project that I’ve worked on. I was coming from being an entrepreneur with my own company to being part of a billion-dollar, publicly traded corporate structure—not just Nike, but the NBA, and the Warriors—they’re all separate voices. At that point it isn’t about talent anymore, it’s really about your experience and your salesmanship of authenticity. I had this knowledge of sports and I had design chops, but I also knew the community.

Q. You designed many NBA uniforms when you were with Nike, but the most successful was “The Town” logo and jersey you designed for the Warriors—it broke NBA merchandise sales records when it was released in 2017, and it’s still incredibly popular. The logo is iconic. How did the design come about, and why do you think it resonates so strongly?

A. I wasn’t just a kid who loves basketball and got a job at Nike. I understand the Warriors, I understand the actual roots of the community. I understand the ebbs and flows of this team in this community for the past 20 years. I was able to bring the authentic punch and push it through. It was amazing. I went to the game where they launched it and it was weird to see it everywhere, because it was such a simple idea, being true to the roots of Oakland. 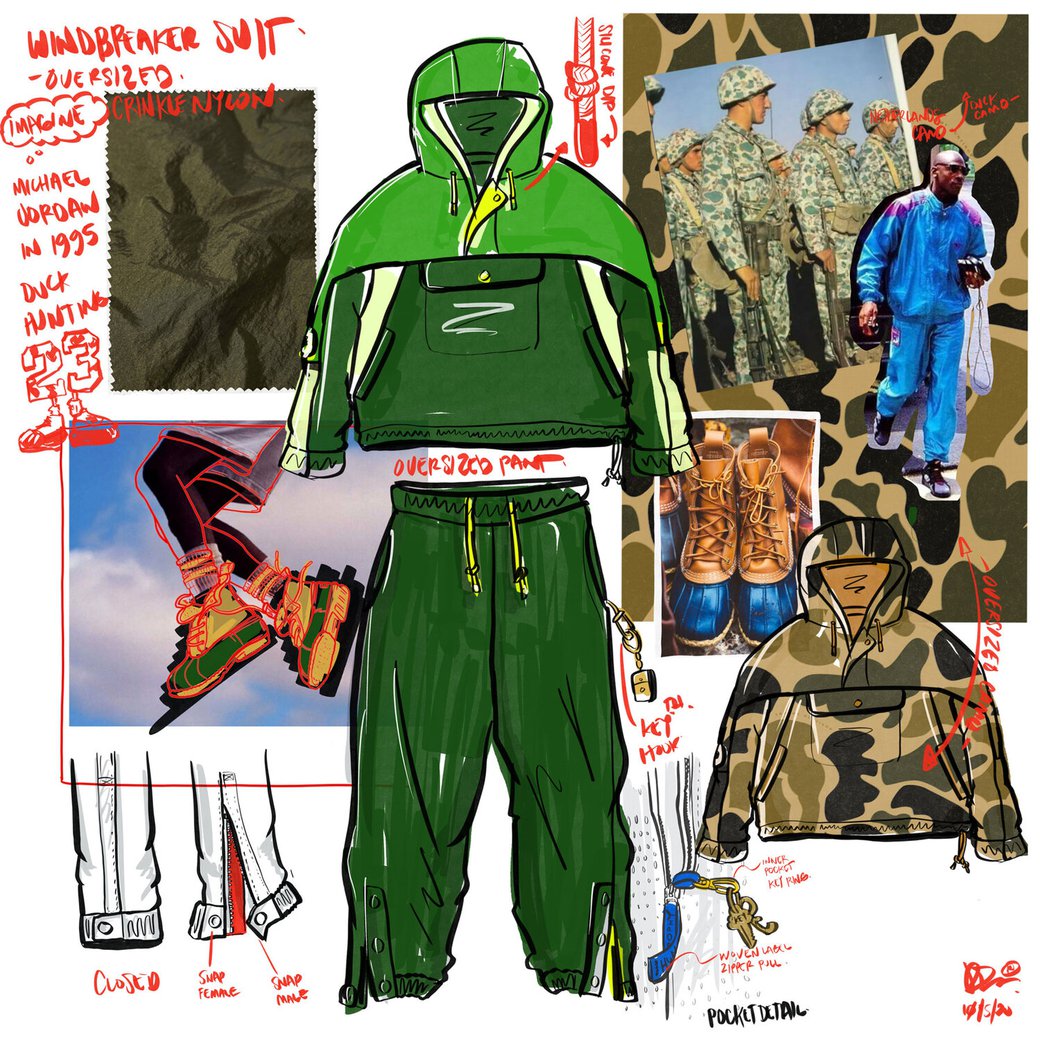 Q. These days you’re really doing your own thing—you’ve launched your own apparel brand, Trophy Hunting, you’re consulting with a lot of major athletic brands, and you’re making your own art. What are you most excited about right now?

A. When I left Nike I had a non-compete agreement, so I had to sit out a year and change, and it was really frustrating. My whole career was tied into sports and athletics, and I couldn’t work on that because of the non-compete. So I bought an iPad and just started doodling. I kind of reverted back to high school, when I would draw these caricatures of people wearing clothes, and it turned into something more. I figured out during that time off that I need three types of creative nourishment: One is art, where no one is telling me what to do, I can do whatever I want. One is consulting for major brands, where I’m still in the mix and I get to work with business units that are way bigger than anything that I could dream of. And one is my entrepreneurship clothing line, being able to shape a brand within the limitations of knowing you still have to sell stuff to make money. Now I’m at the point in my career where I have all three going simultaneously, and I’ve never been happier or more fulfilled.

Get your Dustin O. Canalin-designed merch at ARCH