President Stephen Beal, Studio Gang Founding Principal Jeanne Gang, and members of the CCA community discuss how the expanded campus will profoundly impact the campus and beyond. Photos courtesy of Studio Gang/© Spirit of Space.

Stephen Beal: I’ve always loved your use of language to describe the design intent of this project. Like, “ecologizing the factory,” which just so resonated with me, because being in CCA’s main building is like being in a factory—you get in it and you kind of can’t get out. And so the sorts of opportunities that the Double Ground concept will provide for our students are just remarkable. And that idea of “ecologizing the factory” seems very, very central.

Jeanne Gang: One of the things that has always been interesting about this project is that it’s almost like pulling the guts out of the main building and letting it see the light—as you say, ecologizing the factory. It was so remarkable to see the Oakland campus and all of the natural systems at work there, but then also, when you really drilled down, there wasn’t actually that much green space. When you have green space, it really changes everything. So I think bringing that to the fore, in addition to the ecosystem created by the Double Ground and the relationships between all of the different parts, will really give a new feeling to the campus.'

SB: I agree, and I think the maker yards are a brilliant aspect of the design. I’m so proud of the fact that we are providing almost 50,000 square feet of maker space on that ground floor, and so you get that transparency right away, which is really important. 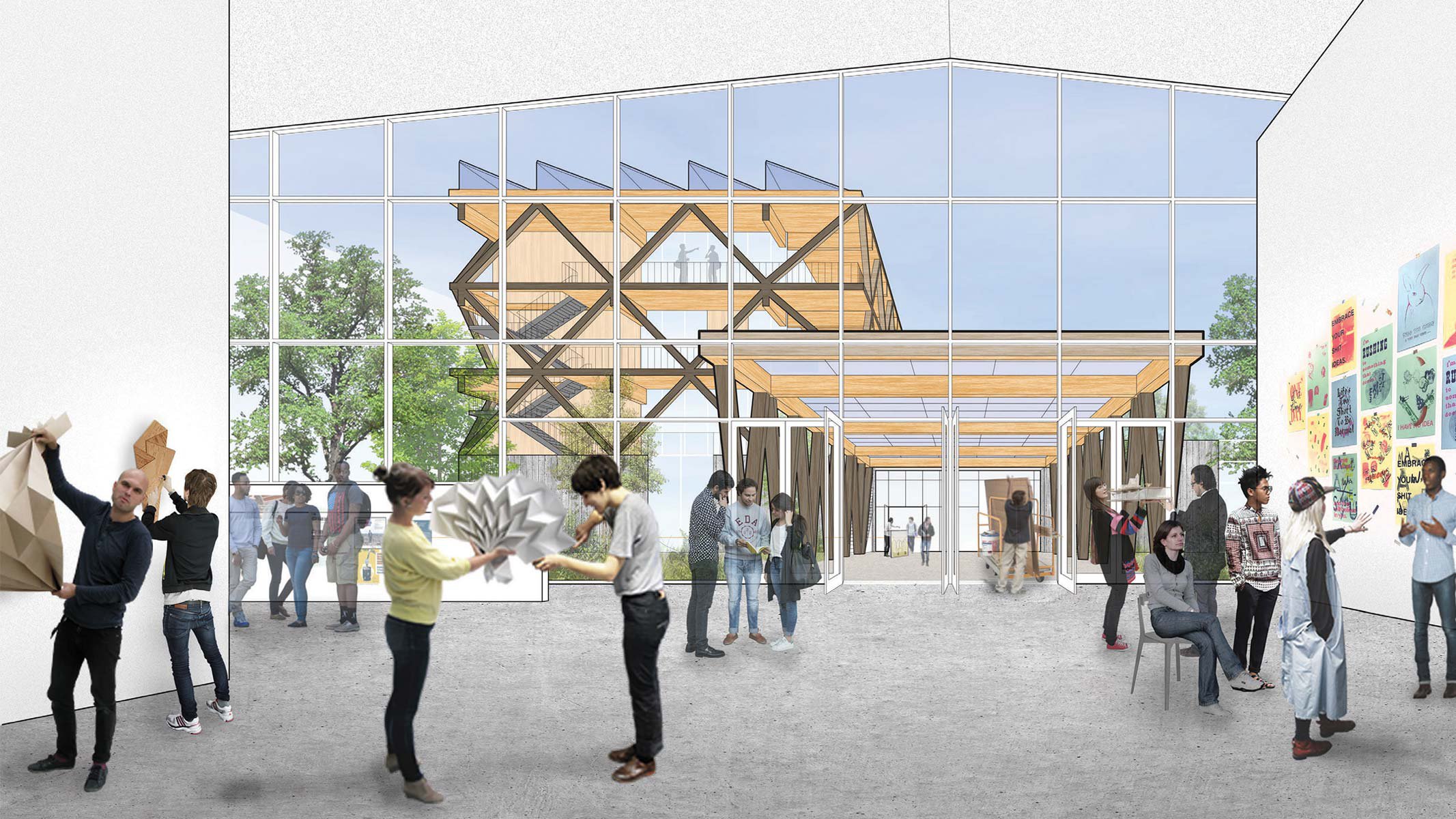 A view from the existing campus of a pavilion in the new build. Rendering courtesy of Studio Gang.

JG: And having a Double Ground gives you the chance to have those lower-level spaces be usable and flexible—messy even. You can still have this slightly more formal campus for studying and class meetings within the landscape above, but it’s also a place where other maker activities like dye-making can happen.

SB: Yes, on the Double Ground above. I think it’s really going to add enormously to the student experience and, of course, having 500 students living right across the street and accessing it is going to be a really important part for us.

“I'm so proud of the fact that we are providing almost 50,000 square feet of maker space on that ground floor.”

JG: And going back to the idea of ecology, it’s going to start to expand to include other parts of the campus, especially with the sustainable strategy that we’ve been working on to minimize energy use, eventually using a microgrid to deploy energy generated by photovoltaics and distribute it where it’s needed. I think the whole infrastructure of the project is such a great story.

SB: It’s been interesting to see how the design and the architectural elements have been developing. It’s going to be so distinctive, compared to other projects that are being built in this neighborhood, and just a fantastically active part of the campus—a hub. It really is going to send a message to the world.

JG: What I notice in the neighborhood is that there are a lot of buildings that are juxtaposing different materials, almost like a collage approach to architecture. And our design does this too, but for us it’s really about expressing the structure and how the building is made. The lateral structure—the way that we prevent the building from shaking itself apart in an earthquake—is expressed on the exterior but it also creates a beautiful lattice-like design. The Double Ground concept is also about taking advantage of the climate, so bringing a lot of the circulation to the outside of the buildings, which will also make the campus more cohesive. 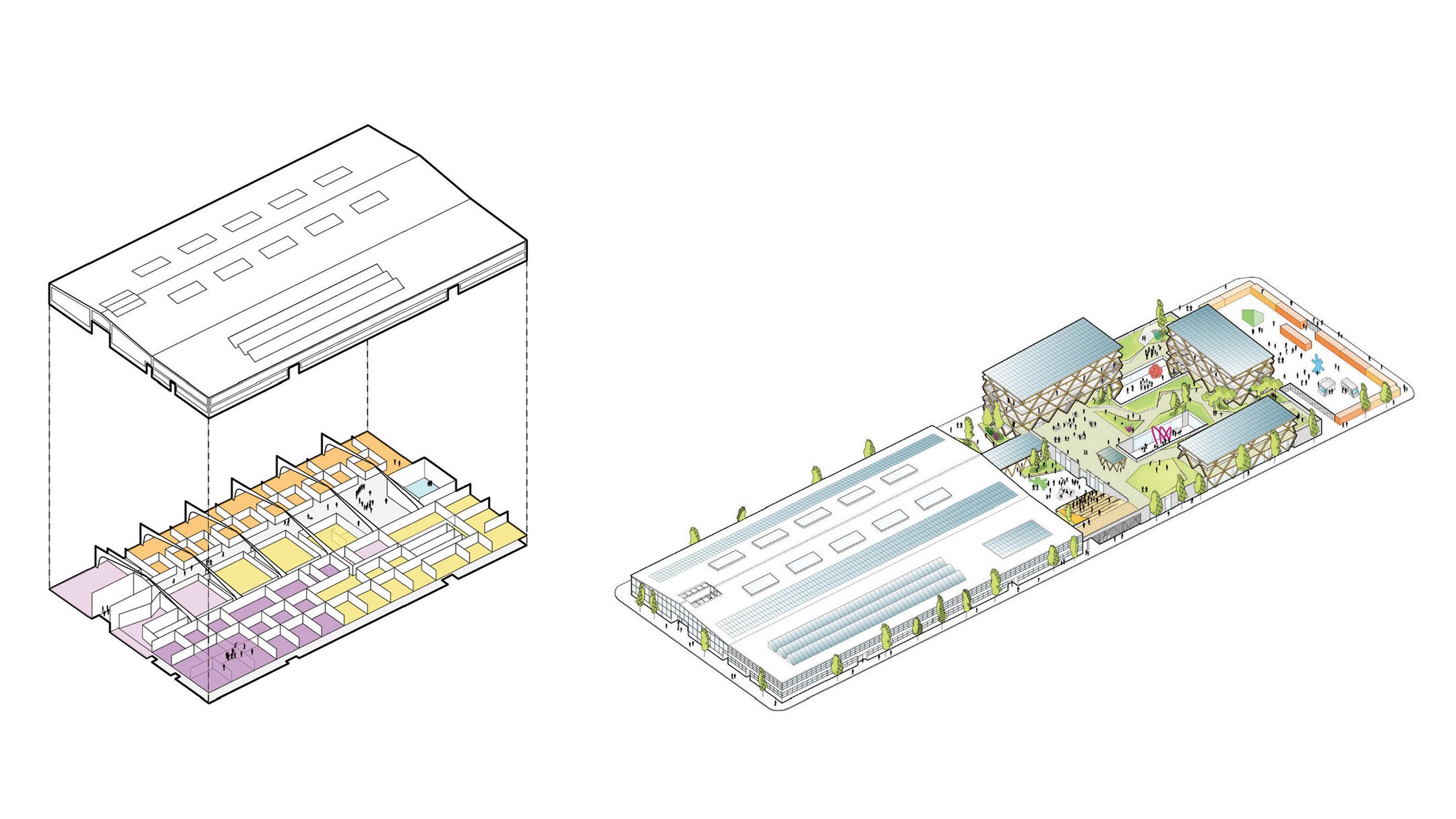 SB: That’s really impressive to me, and it’s great to have watched how those design elements have evolved—the materiality, the use of wood, the color. These material aspects are going to be great expressions of the values at CCA as well.

JG: Yes, like making use of whatever we can for renewable energy, like the photovoltaics [solar panels]. And I think that’s also the perfect use of this specific place in San Francisco, which has a lot of sun actually, compared to other parts of the country. I also think the urbanism aspect of the project is really strong, connecting through the block so it’s not just one long, massive building, and making Hooper Street a kind of central spine to connect the current building to the future buildings. And, again, it has the potential to further extend in the future. You’re also so close to the water, which I think people don’t realize.

SB: They really don’t. It’s very close to spectacular nature, actually. And I do think that the real opportunity of connecting this campus to what’s happening in the neighborhood is going to happen tremendously through the Double Ground. It’s really exciting. I can’t wait!