Masaharu, one of the main characters from Babak Saadat’s Harukaze, in different combat positions.

Before CCA launched the BFA in Game Arts in fall 2021, Babak Saadat followed his passions and created his own focus in game design.

One of Babak Saadat’s (BFA Animation 2021) childhood dreams was to design games, but when he came to CCA, he initially focused on TV and movie animation. Through one of his professors, he discovered a few game electives and carved out his own dedicated focus in game design. The culmination of that work was Saadat’s senior thesis project, Harukaze, an RPG-style video game set in war-ravaged Japan that he’s continuing to develop after his graduation in 2021.

Saadat created his own games concentration, but beginning in fall 2021, students can officially get a BFA in Game Arts. (He’s a little jealous.) “Students at CCA are lucky that our Game Arts program is more art and design-oriented,” says Saadat, who notes that other game programs often focus on programming. “Learning about the fundamental design of games and even working on physical and analog projects will be really fun and rewarding. Who knows, maybe the next game designer coming out of CCA will make a successful board game!”

We caught up with Saadat to talk about his work on Harukaze, why it’s an exciting time for indie game developers, and what he wants incoming students to know as they begin their CCA journey. 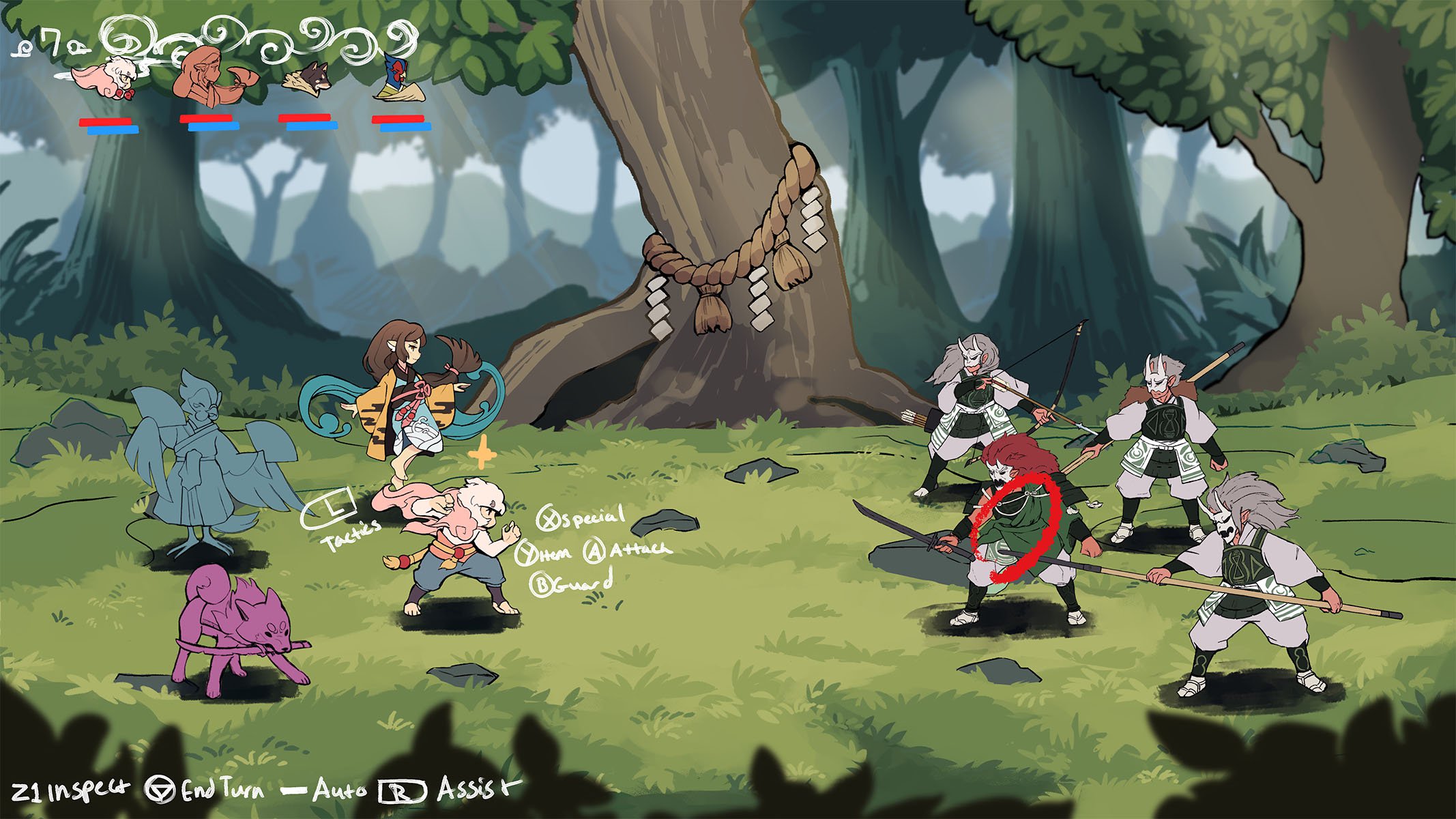 A still from Babak Saadat’s video game, Harukaze, from his senior thesis.

From concept art to character design to world-building, what inspires your work?

Oh man, that's a lot to try to cover . . . . World history is important for how I try to do world-building and storytelling. Drawing from my love of history (and the cultures, art, and mythology tied to it) helps so much in my creative process. It's satisfying when the world I am creating feels like it has a believable history, especially when others get invested in the world I’ve created.

Games are another source of inspiration. I don't think one single game has been influential on my own style or process, though. I usually find myself brainstorming about one game because it did a great job of delivering a narrative, but then another one that's in a completely different setting and style has really great game mechanics, and then another game has amazing music, and so on.

Babak Saadat muses on his interactive practice, collaborative design, and finding his own creative path at California College of the Arts.

It's hard to avoid, but I really do like Hayao Miyazaki’s works and his style of storytelling. He’s been such a big inspiration for so many new artists. My top three favorite films are Porco Rosso, Nausicaä of the Valley of the Wind, and Princess Mononoke. I also really like his watercolor manga adaptation of Tigers in the Mud and Daydream Data Notes.

And I don't think I would have been able to develop this far without help from my friends and collaborators. A lot of inspiration can be found from the people you work closely with and from other contemporary artists. My designs so far have been the result of many collaborations and contributions from others.

Tell us about Harukaze, the game project you’re currently working on.

Harukaze started out as a simple project in class. At some point, something clicked and I liked how everything was going, so I decided to keep with it through my time at CCA. The game will be a single-player, turn-based role-playing game (RPG) set in a world inspired by Japanese folktales. You’ll play as two magical martial arts–fighting monkey-spirit siblings named Masaharu and Ami. Guided by the great water spirit Asahi, they must do their best to stop an escalating conflict between the Humans and Oni. And along the way there will be characters who join your cause, each having their own reasons to fight by your side to end the war. The narrative and player actions will be a big part of the design. I plan to include peaceful or unexpected solutions for players to figure out through the game, and I want the player to feel like they aren't fighting alone. The supporting characters should be an integral part of the game experience. 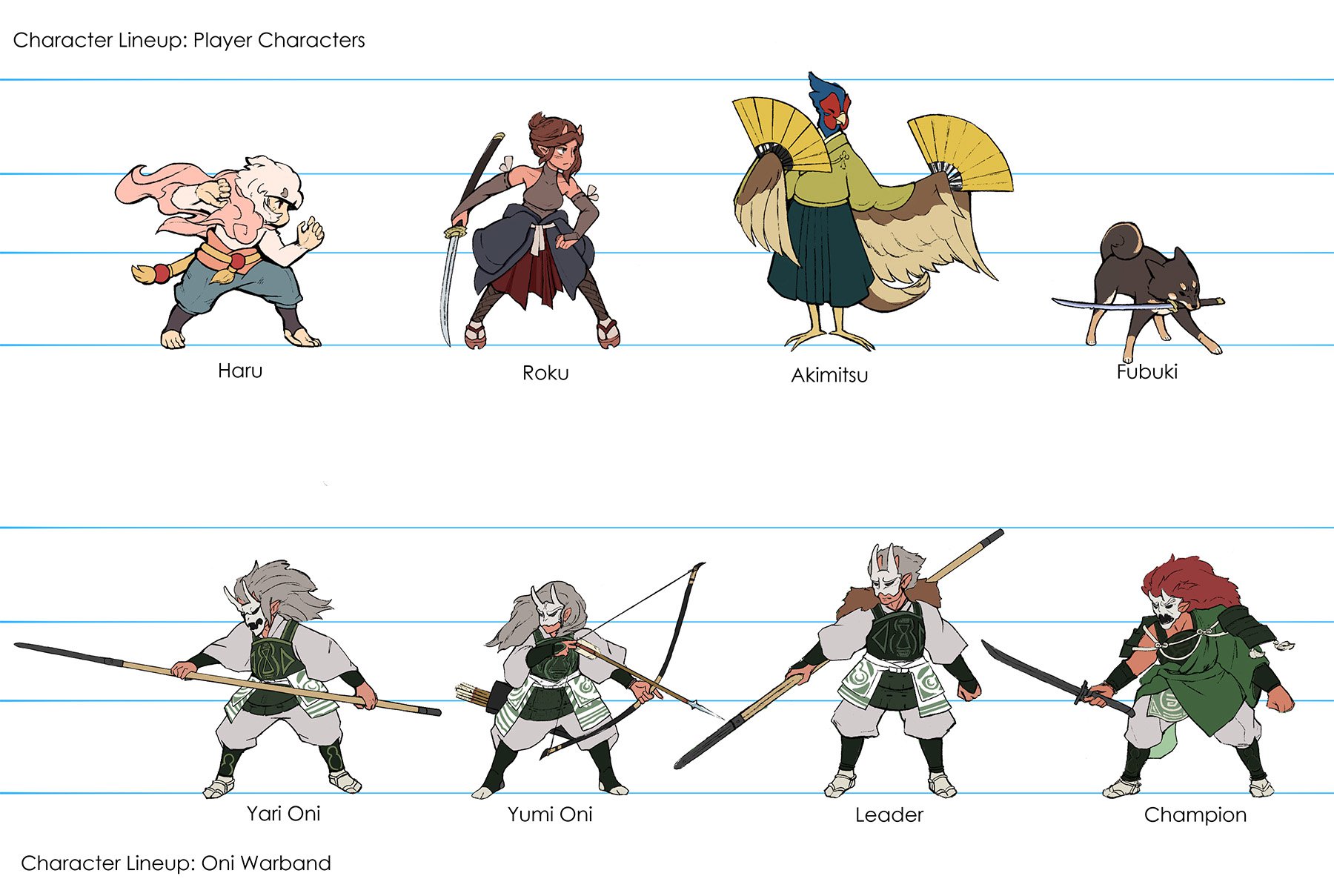 What excites you about the field of game design?

I'm really excited about the amount of attention and love that smaller and mid-sized indie game projects are getting now. I'm a big fan of SuperGiant Games [makers of Hades] and it is awesome to see a small local indie studio do so well. Since I want to make Harukaze as an independent developer, it's super encouraging to see the success of SuperGiant Games. Also, it wasn't so long ago that many of the tools we use today were not available to average users. ​​I couldn't have imagined they would become so accessible. 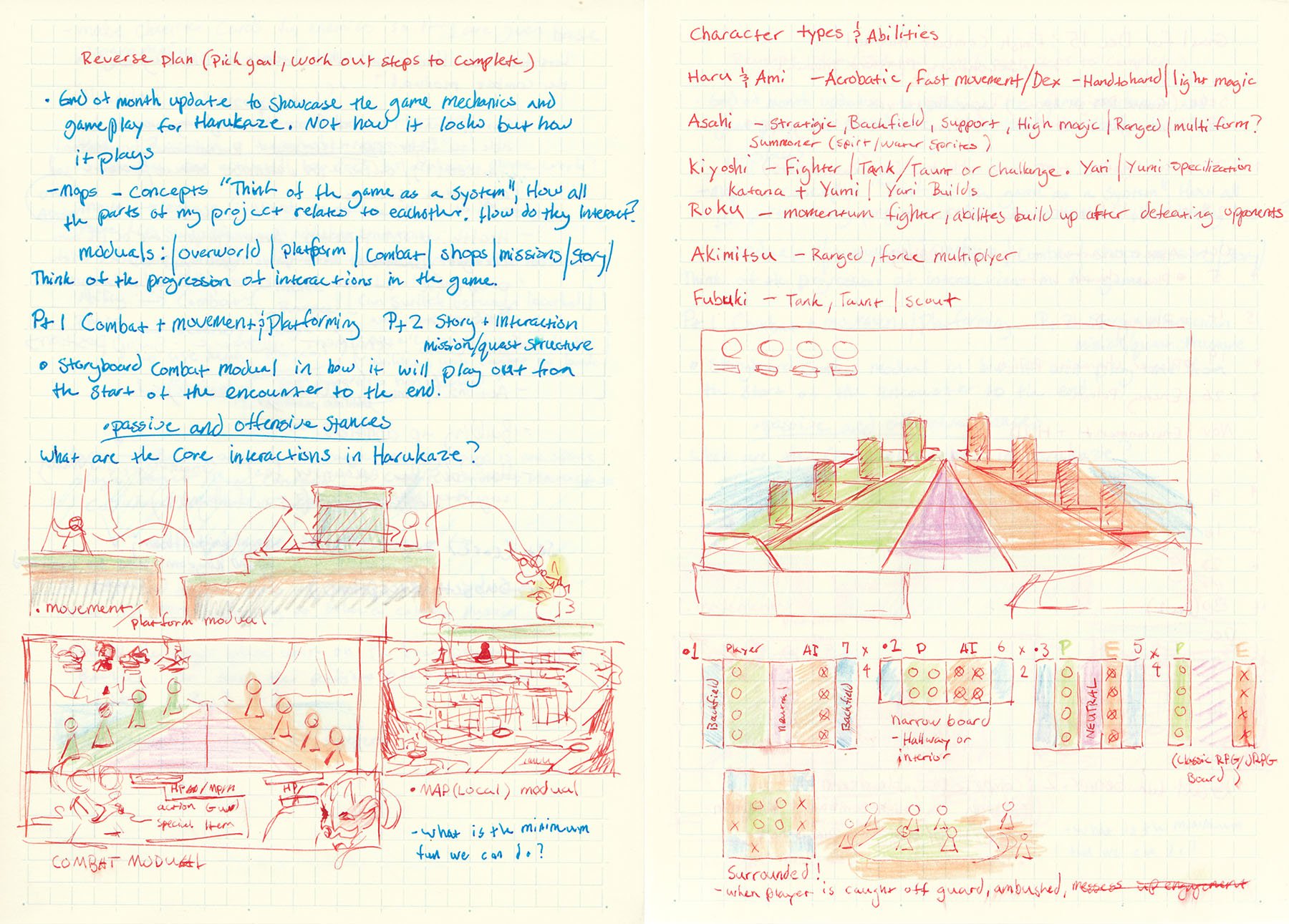 A page from Saadat’s game design journal shows how he mapped out a plan and the characters for Harukaze.

How did the learning environment at CCA encourage creative collaboration?

The small classes help—everything is more personal and you get time to bond with classmates. It also helped that the majority of students in Animation love to play games! Critiques were the best, since getting feedback helps so much in improving as a designer. And I appreciate the trust I was given by my professors to forge my own path into game design.

What advice would you give incoming students?

Take advantage of critiques in class and engage with your classmates and teachers. If you don't do that, you’re wasting your money. Don't be afraid to make mistakes when creating, and accept those mistakes. Oh, and finish all of those academic classes first—I highly recommend the eco-art classes. If I had known about them sooner, I could have gotten a minor in Ecological Practices.

“Don't be afraid to make mistakes when creating, and accept those mistakes.”

What’s your favorite tool for creation?

Procreate, hands-down, is such a great tool and everything I was hoping for when tablets became a thing. I do wish to make time again to practice watercolor, but it's been hard having to focus on improving my digital work and trying to juggle so many different “hats.”

What are you listening to, reading, or playing right now?

I've been diving into YouTube channels about city planning and infrastructure. I'm reading Level Design: Process and Experiences, which is a collection of articles by different game developers. And I started reading Finding the Mother Tree: Discovering the Wisdom of the Forest by Suzanne Simard. For games, I’ve been playing Cities Skylines, Darkest Dungeon, Crusader Kings 2, and finishing Persona 5. 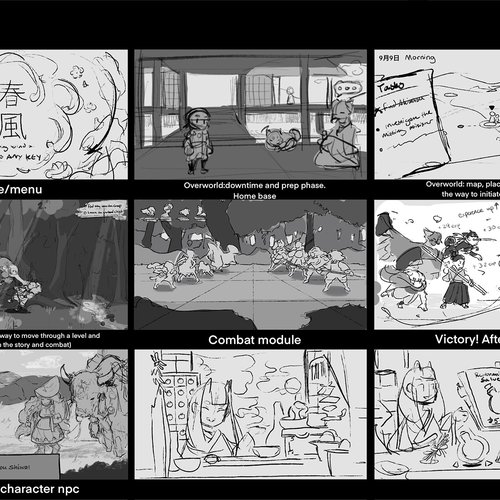 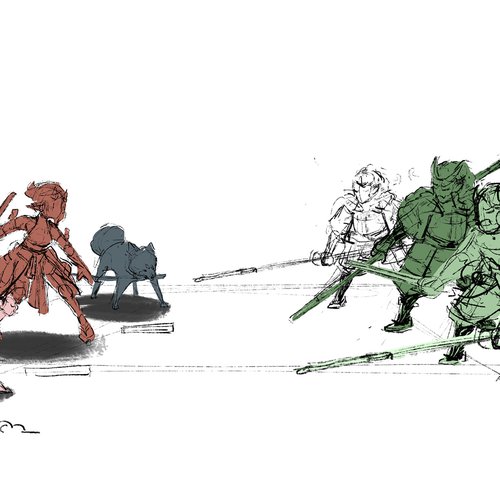 An early sketch of a battle scene from Harukaze. 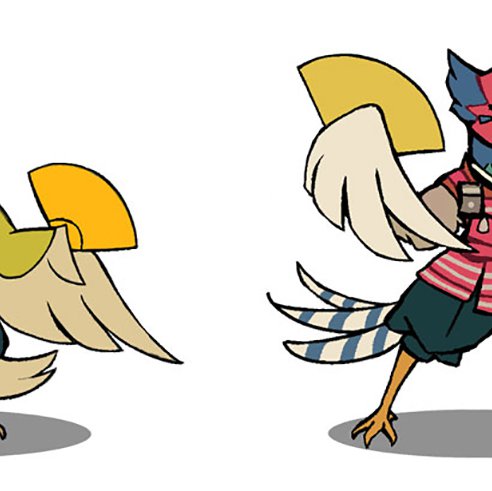 Akimitsu, one of the characters in Harukaze. 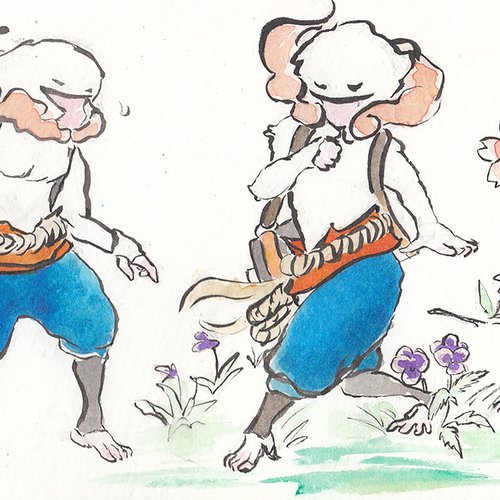 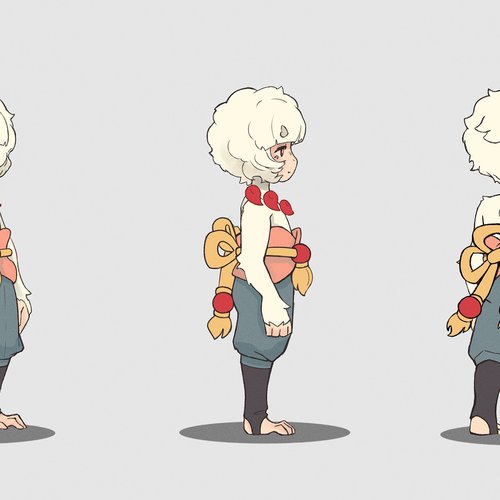 Masaharu in his present form. 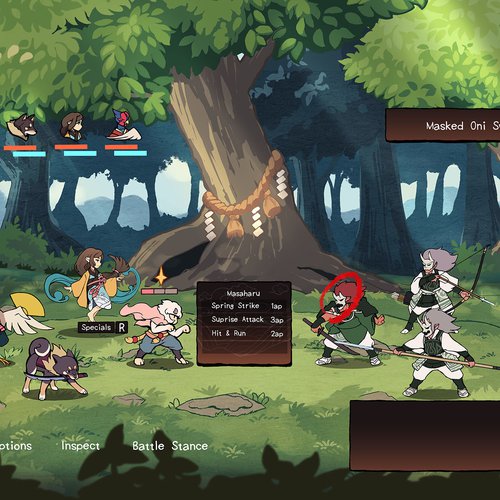 A battle mock-up from Saadat’s senior thesis presentation of Harukaze.