A giant of a generation

In 1972, CCA (then California College of Arts and Crafts) presented Wayne Thiebaud with an honorary doctorate degree. The move allowed the college to recognize this influential artist’s dedication to teaching and celebrate his innovative painterly style that blended two American art movements—Pop Art and Realism—into one unique artistic voice rooted in the West Coast.

That same year, Thiebaud established a second home and studio in Potrero Hill and began painting his cityscapes of San Francisco. Nearly 50 years later, Thiebaud and his work are still celebrated across the bay, and his most iconic paintings of colorful confectionery are recognized around the world. 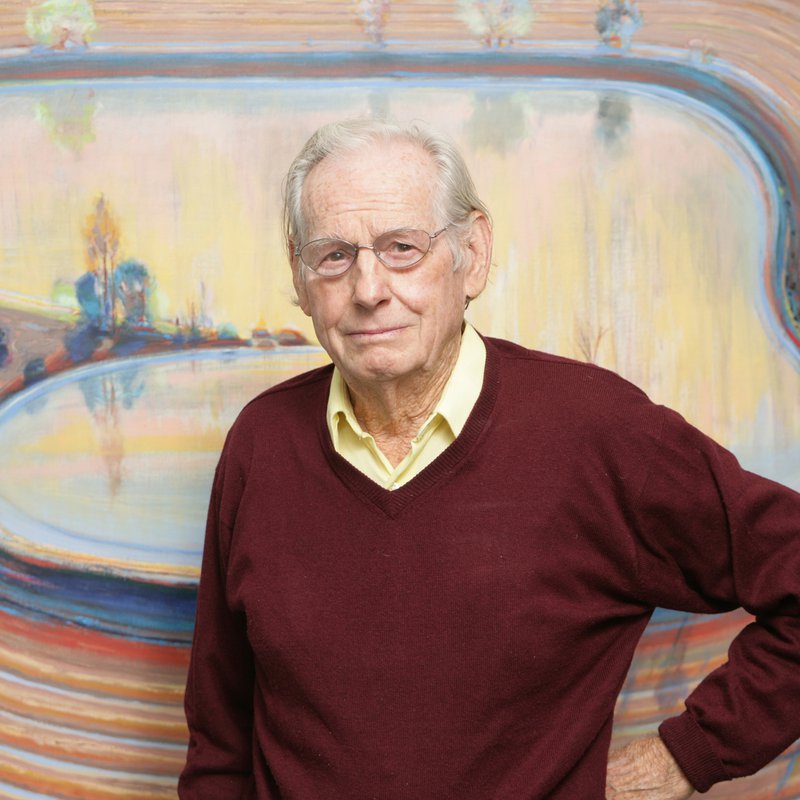 Honoring one of California’s greatest artists and educators

Thiebaud’s paintings of cakes, ice cream, and hors d'oeuvres are at once identifiable, but his storied career spans myriad disciplines, including illustration, cartooning, graphic design, painting, and drawing. His oeuvre of subject matter is diverse, too. Drawing inspiration from his new vantage in Potrero Hill, Thiebaud developed a series of paintings that capture the dizzying city streets and energy of San Francisco.

“I was,” he said in the book Delicious: The Life and Art of Wayne Thiebaud, “fascinated by those plunging streets, where you get down to an intersection and all four streets take off in different directions.”

His paintings offer a dramatic way of seeing the streets of San Francisco. Their intensity evokes a visual experience that leaves viewers hungry to look for a long time at something that is at once familiar and foreign. His widely known works of lipsticks and pies, paint cans and pastries, build a similarly subtle feeling of the everyday—elevated.

“The compositions are classically arranged. There are incredible geometries. There’s almost as much rigor in terms of the way he sets up what he’s going to paint,” said Virginia Mecklenburg, chief curator at the Smithsonian American Art Museum, in the museum’s video Wayne Thiebaud: Beyond the Cakes. “He gives a viewpoint that’s not what we would actually probably be seeing when we were out in the world.”

The decadent applications of paint. The juicy use of a color and its syrupy contrasts. The quiet lines beside theatrical shadows. The fresh take on a stale course. All are characteristic of Thiebaud’s most powerful work.

“[His painting] transfers the relationship that we know between ourselves and an object or our sense of our normal spatial relationships into something that’s different,” Mecklenburg continues. “It gives us this sort of double take, almost an immediate reaction, that makes us go back and have a second look and try to figure out what is so magic about what he’s painting.”

From the Air Force to the commercial world

Thiebaud’s inclination toward the arts began in high school. He designed movie posters for local theaters, took summer classes in commercial art at the Frank Wiggins Trade School in Los Angeles, and completed a summer apprenticeship program in the animation department of Walt Disney Studios. He worked on the beloved characters Goofy, Pinocchio, and Jiminy Cricket, drawing the frames that ran between the main frames as an “in-betweener,” a beginner's job also once held by the iconic Bambi animator Tyrus Wong.

From 1942 to 1945, Thiebaud served in the Air Force’s Special Services Department as an artist and cartoonist, eventually transferring to the First Air Force Motion Picture Unit (FMPU) commanded by Ronald Reagan. The FMPU was a military unit made up of film industry professionals who created propaganda and training films. His work in the arts continued throughout his service. He created more posters, worked on murals, and developed a cartoon strip called Aleck for the base newspaper Wing Tips.

“Painting is life for me. It is kind of a miracle.”

After his time in the Air Force, Thiebaud continued his commercial arts education as a freelance commercial artist in Los Angeles and New York. He took a job as an art director at the Rexall Drug Company, where he oversaw the layout and design of company magazines and created a cartoon called Ferbus for Rexall’s publications. This was a turning point for Thiebaud’s career.

“The more I got interested in layout and design, the more I was led to those examples in fine art from which they were derived,” explained Thiebaud in Art of the Real: Nine American Figurative Painters. “The most interesting designs were influenced by Mondrian or Degas or Matisse. That revelation really transfixed me.”

This pivotal moment during his work as an art director launched Thiebaud into a decades-long teaching career in higher education.

Learn more about Thiebaud’s life, work, and influences in The American Academy of Achievement

Making an impact beyond the canvas

Thiebaud’s passion and dedication to arts education was a vibrant mainstay to his career, even as he gained national and international acclaim as a painter of American desserts, landscapes, cities, and people.

He pursued a formal arts education, earning his bachelor of arts in 1951 from California State University in Sacramento and carried on to earn a master’s degree in studio art with a focus in art history, theory, and education in 1953. Shortly after, he began teaching at Sacramento City College and eventually chaired the art department from 1954–56 and 1958–1960.

He was then appointed assistant professor in the Department of Art at University of California, Davis, where he cultivated a career as a highly respected professor until his retirement. The distinguished careers of many of Thiebaud’s students are a testament to his tremendous skills educating others. Those efforts had a ripple effect: Thiebaud taught and championed the late postmodern painter Fritz Scholder, whose work sparked a transformational conversation about the myth of the American Indian and who became an important figure of American art history himself.

In 1981, Thiebaud was named Distinguished Art Studio Teacher of the Year by the College Art Association of America and has received numerous awards for his teaching and mentorship that has impacted generations of younger artists across the nation.

His influence continues to encourage young and emerging artists—including many CCA students and alumni—to move fluidly between disciplines and experiment with color and composition in their work. 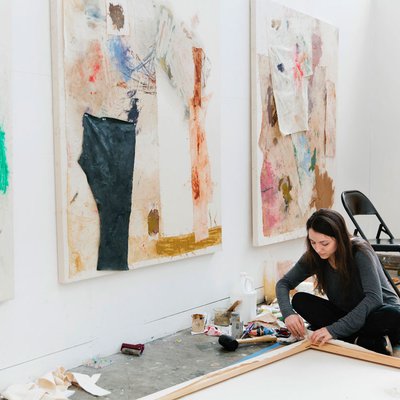 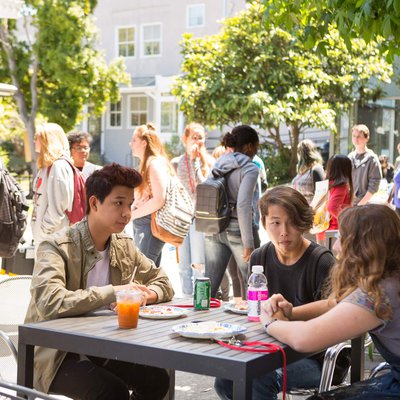 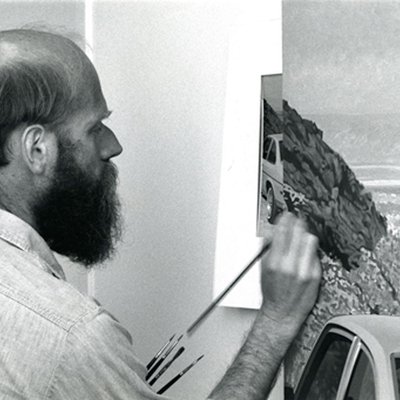 A legacy in California and beyond

In 1987, the San Francisco Arts Commission presented Thiebaud with the Award of Honor for distinguished services in the arts, and the San Francisco Chamber of Commerce awarded him the Cyril Magnin Award for Outstanding Individual Achievement in the Arts.

The accolades continued into the nineties. In 1991, Thiebaud received the Governor's Award for Lifetime Achievement in the Arts. Then, in 1994, he received the National Medal of Arts Presidential Award from President Bill Clinton.

“The nerve of failure I think is paramount. Learning by mistakes, modifying, reconstituting, reorganizing.”

Thiebaud also remains highly celebrated and relevant in Northern California, especially amid the art stalwarts of his geographical muse, San Francisco. At 98 years old, he saw not one but two exhibitions examining his artistic contributions presented at the San Francisco Museum of Modern Art (SFMOMA).

Other major art institutions and galleries in the Bay Area, such as Legion of Honor, de Young Museum, Oakland Museum of Art, San Jose Museum of Art and, John Berggruen Gallery, have presented Thiebaud’s work to audiences over the years.

Led by intellectual curiosity, risk-taking, collaboration, innovation, compassion, and integrity, Thiebaud has upheld the values of a CCA artist and educator throughout his life and career. And his legacy continues to evolve and grow. As the Smithsonian’s Mecklenburg put it, “Wayne Thiebaud is one of the giants of our generation of artists.”